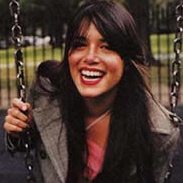 The World's Not Ready

And I mean that in a good way. I felt privileged to be part of a small audience to experience Rachael Yamagata's emotive voice, inventive but hooky compositions, intense sentiment, and talent. It was great to hear her singing from the heart and having a voice capable of channeling it. I appreciated that cello and violin accompaniment gave her live show a more eerie and less country sound.

What makes me say that the world's not ready were lyrics like, "Is there a woman out there who'll take me". Yamagata had nearly everything; I wouldn't say she should she should alter her message — but rather use more refined, intentional understatement. I am sure mainstream success would be hers if there were a bit more fog to cover the car crashes. Not that this should be the goal, or that it wasn't delicious to share the car crashes live.

My favorite example of inventive but hooky is "Letter Read" which has a discordant verse and catchy chorus. To crudely describe her sound, I would say it was equal parts Norah Jones, Alicia Keys, and Janis Joplin. I dug maybe half the songs, but felt the privilege of a soccer scout watching a young star thanks to the honesty and realness of her performance.