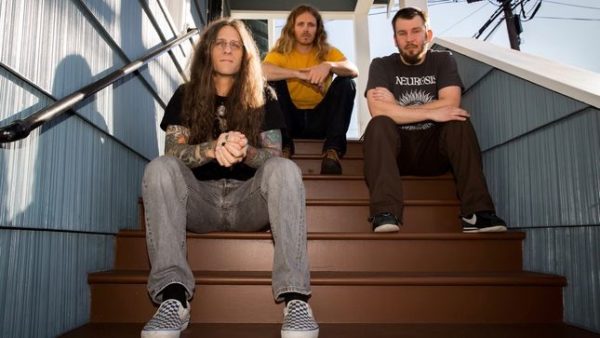 YOB + Conan + The Ditch and the Delta at Chop Suey

This was my first time going to Chop Suey since moving to Seattle a few months ago. I have to say it’s a nice place! Feels like you’re at some ol’ dive bar when you’re up front watching the bands, but then you remember there’s tons of space behind you. I would definitely drink at that bar facing East Madison if I lived closer.

The Ditch and the Delta, a band I’ve never heard (of), opened. They were cool! I heard a good bit of early Mastodon in them, which is always a nice surprise. (Not that Mastodon is exactly an obscure influence for newer sludge metal bands to pull from, but I digress.) Listening to their record, Hives in Decline, I can confirm this fact. Everything I remember from the performance is here — lots of palm-muted riffs, some chugging (without the excess). Vocals lying somewhere between exasperated and angry — maybe more towards the latter. Andy Patterson from SubRosa (another fantastic Salt Lake City group) did the engineering here, and it sounds superb. You can really feel yourself sink down with their low notes. The second track, “Fuck on Asphalt” (always love when a title accurately describes how a song sounds), is definitely a favorite, alternating between fast-paced and mournful — and that guitar solo! However, the instrumental interlude “Dry Land,” a bit of progressive folk that would definitely appeal to fans of Steve Von Till or Scott Kelly’s solo material, is where the band really shines, IMO. It may not be what the band wants to hear, seeing as it is kind of an outlier in the grand scheme of things, but I think if TDATD explored this direction on their next album, they could break from their niche and get some cross-appeal love. I genuinely loved it.

Next up we had Conan, who was clearly a large draw for much of the audience. Conan is notable for having one of the… heaviest tones in doom metal. I include the ellipsis because “heavy” is such a platitude in doom metal, and it really doesn’t tell you anything about their sound if you think about it, but their tone really is so earth-shattering that I can think of no other way to articulate it. Perhaps some clarification is in order. The consensus from a quick google search is that the band plays in drop-F, with the addition of several bass cabinets & amps. It was almost overwhelming, but obviously in the best way possible. Here’s a good live video, because words don’t really seem to do this justice.

And finally, YOB. I’ve seen YOB four times before: the first was back in 2011, opening for Tool (I’m serious). I didn’t get a strong enough impression either way (you know, being in a stadium setting and all — probably not their ideal setting), but fortunately, I saw them just a few months later playing a set at the Maryland Death Fest in Baltimore, and they blew my mind. And I had only just started listening to them on record, so I only recognized the songs from their then-latest record (2011’s Atma)! The third was a couple years later at a great dive bar in Atlanta, Georgia; it was so important to see them that night that I actually left Swans early from all the way across town. Fortunately, their rendition of “Burning the Altar” left me speechless and alone justified the early departure. I won’t even mention the fourth because that venue’s notoriously bad sound ruined the show for me. I’d say this night’s performance was one of the better ones, with the admission that it’s hard to top the first time.

Anyway, now seems like the right place to make an admission: I don’t listen to that much doom metal anymore. I appreciate it, and I can still get into my old favorites, but I don’t make that much of an effort to seek out newer bands. So all that is to say that, even now, seeing YOB live was a no-brainer. I hardly even considered the possibility of not going. And they did not disappoint.

You’ve got to give credit to a band that spends the first hour only playing songs you’ve never heard. It’s that confidence, man. Knowing that a majority of your fans are coming in hoping you’ll play a particular song (or two, or three) and then saying nope. But there’s no fuck you to it. It’s not them saying I don’t care if you came to hear this song, deal with it as much as it is Hey, since you guys love our other stuff, we think maybe you’ll dig this. And we respect you guys so much that y’all are the first ones to hear ‘em. At this point in their career, they have the luxury to not exclusively deal in fanservice. (That being said, they did close the night with two* older cuts, “Grasping Air” from 2005’s excellent The Unreal Never Lived (or was it “Kosmos”? I think it was “Grasping Air”…) and “Prepare the Ground” from Atma.) And the new songs were pretty good! One of them was pretty much a ten-minute doom-laden breakdown, very much in the vein of the title track from Atma or an even older cut like “Exorcism of the Host” (the first half, anyway). Mike Schedit’s growls were on point. I think fans will be in for a treat when the new album comes out this summer. If you have the chance, make sure to see them sometime during this tour to get your own sneak peek!

*or was it three? I thought it was three… I just can’t recall the other song I heard. It may have been “Breathing from the Shallows” from 2009’s The Great Cessation (recently reissued!). Either way, it (if it existed) sounded great!