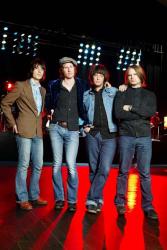 A few years ago, a friend of mine described You Am I as everyone’s favorite band (among people who know the band even exists). Huge in their homeland of Australia, You Am I has yet to break in the US — and that is definitely cause for concern, as the band makes great, solid rock and roll. Frontman Tim Rogers has an intimate voice and writes personal but accessible songs: imagine if Elliot Smith fronted the Rolling Stones.

Playing a label showcase for Yep Rock Records, on a bill that also included Apples in Stereo and Robyn Hitchcock (with Peter Buck of R.E.M. and Sean Nelson of Harvey Danger singing backup), You Am I stole the show. Their set mostly featured songs from their latest album, Convicts, but threw in at least one of You Am I classic: “Berlin Chair,” which first appeared in recorded form in 1993. Rogers joked about his band’s difficulty in catching notice outside of Australia by saying it was the band’s first number 43 single. In the Netherlands.

After a solid 35-minute set, Rogers walked off the stage and lay down in his open guitar case, obviously showing that all of his energy had gone into his performance.

The band comes to the Crocodile for a very rare show on Wednesday, March 28 and is definitely worth checking out.