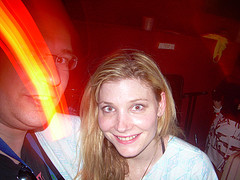 This SXSW showcase celebrated one of my favorite record labels, Kill Rock Stars, and the two different artists I caught (Macromantics and Marnie Stern) shows just how eclectic its lineup is.

A few years ago, being the best white, female rapper was a lot like, to borrow a line from the once-funny Dennis Miller, being valedictorian of summer school. Hip hop just has never really been a welcoming environment for women in general and Caucasian women in particular. With the ladies from Northern State, Lady Sovereign, Princess Superstar and Australian rapper Macromantics being the latest, the talent pool is getting much deeper and these women are becoming harder and harder to ignore. Macromantics may yet be the best lyricist and MC of the group.

Her songs came almost exclusively from her album Moments in Movement, which was released in the US on KRS earlier this year and on an Australian label last year. She was also a guitarist for Ben Lee’s band Noise Addict when they were both teenagers in the 1990s and branched off into hip hop much more recently. She is socially aware and expresses that through her rhymes. Her MySpace bio even name-checks both Kathleen Hannah and the Wu Tang Clan as influences. Despite a mostly indie rock audience (it was a party for Kill Rock Stars, after all), the crowd was very receptive to her sound, and many were even [gasp] dancing. I guess that's what I get to see for leaving Seattle and heading to Texas!

Accompanied only by a DJ with turntable (and even then the beats were secondary to rhymes), Marcromantics spent almost half of her time rhyming a capella. She’ll bring her tour to Chop Suey Thursday night (March 29) and is definitely worth checking out.

Following Macromantics was the new guitar goddess, Marnie Stern. If her biography is correct, she’s a self-taught guitarist who pursued indie rock after being blown away by Sleater-Kinney when she was 23. She reportedly practiced enough until she had enough songs for a demo and was quickly signed to 5RC, a division of KRS.

This night she took the stage with just a guitar and an iPod Mini on her belt (which provided a drum track for her songs — Zach Hill of the band Hella played drums on her record) and absolutely shredded. Her set lasted about 25 minutes, but what a glorious 25 minutes! She seemed to be channeling Jimmy Page when she was on stage and getting sounds from her guitar that sounded surreal. Her debut album is called In Advance of the Broken Arm and is easily one of my favorites thus far into the year.