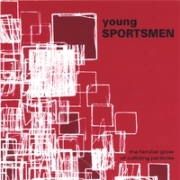 The Familiar Glow of Colliding Particles

Young Sportsmen have released five shattering, pumping, bass-run, drum-pounding, air-guitar shredding power-post-punk-pop songs, written by Ryan Maxwell and Wesley Nelson, vocals and guitar and guitar and vocals, respectively. The band started long ago as Dirty Bomb (with noteworthy drummer Burke Thomas from Vendetta Red), who ws replaced more than adequately by Jeff Roeser. His intricate rhythms throughout The Familiar Glow of Colliding Particles not only drive the music, but are also nimble enough to allow Nelson and Maxwell to grind and shriek pure joy from their strings.

Jason Lackie, who once played bass in the band back in the day, produced the songs with Andy Smith of Crown Aruba. Richard (Dear John Letters) Davidson's bass playing is reminiscent of Bruce Foxton's for the Jam, fat and throttling beneath the din one minute, picked into melodic interplay on a bridge before everything explodes again. The album opens with tracks that have a more Anglo-thrash feel, but further on into the album a more American indie rock feel develops (especially in the most-contemporaneous sounding "Nickel For Lucy," probably the big hit here).

Somehow, Young Sportsmen get away with making all the songs on the EP full-on anthems without ever saturating it with emo-overkill. The lyrics seem sharp and full of interesting imagery, splintering political ideas ("Chavez") with relationships to technology ("The Rocks and the Stars") and the Superchunk-like journal entries of scattered romance ("oh, ain't it strange, you were better off"). Whilst a lyric sheet might be a good idea, the tunes are so catchy it's a great pleasure to keep coming back to figure out what's being sung.

There's something truly exceptional about the energy on this mini-album, in line with earlier work of Ted Leo or the Futureheads. We can expect Young Sportsmen's first full-length to be a solid sequence of appealing gems. Can't wait to hear it happen.