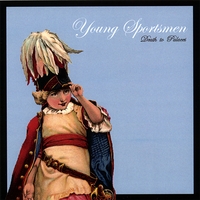 Early last year, my friend and TIG colleague Chris Estey wrote this about the Young Sportsmen’s debut EP The Familiar Glow of Colliding Particles: “There's something truly exceptional about the energy on this mini-album, in line with earlier work of Ted Leo or the Futureheads. We can expect Young Sportsmen's first full-length to be a solid sequence of appealing gems. Can't wait to hear it happen.” He was absolutely right.

It has taken about 18 months for this Seattle-based power-pop band to release a proper LP; Death to Palaces is that album and in several ways, it's stunning. They “play pure pop… loudly,” as the bio on their MySpace page puts it aptly. With the loud, crunchy guitar chords and emphasis on catchy harmonies and lyrics, the band they most closely resemble to me is Australian rockers You Am I, who they opened for last March (and has thus far been the best show I’ve been to all year). You can also hear elements of Ted Leo + the Pharmacists, XTC, Big Star, and the Who, amongst others.

If their sound is derived from their influences, they clearly are listening to the right CDs. Death to Palaces has ten songs and all range from very solid to great. It starts out with the Cheap Trick-esque “Unnecessary,” which has oddly depressing lyric content for a pop band to make, but it completely works with the record. The song opens by stating, “Did you ever get the feeling you’re unnecessary? You try and try and try but you’ll never be a contribution.” The tempo is far more upbeat than the lyrical content. The second track, “Her Independent Feature” continues that momentum (and never really loses it over the course of Death to Palaces). It reminds me of a more rockin’ New Pornographers song. When the song gets to the chorus it's damn near impossible to want to sing along. My favorite track, however, is “Under the Stars and Rocks,” a well-constructed powerpop song with driving guitar chords, crystal clear and catchy vocals… and every verse sounds anthemic. It truly is one of the best songs I’ve heard all year.

Each song on this album is an enjoyable pop number and it does not make a single misstep. While each has does not differ much from its predecessor (the Young Sportsmen have a fairly consistent and original sound) they never sound the same or derivative. To put it bluntly, this is a great record by a great band and I can only see them getting better and better. It's easily one of my favorites of 2007.