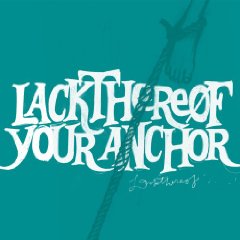 Danny Seim, one third of Portland's Menomena, spent years recording solo work out of his house and handing it out to friends under the moniker Lackthereof, before and after Menomena's experimental pop was showered with Pitchfork praise and indie cred. One fantastic band is impressive for most mortals. Where does an artist get the focus and motivation to stick with two?

If anything, Lackthereof's newest album, Your Anchor, is proof that the original project deserves just as much attention. Both bands use the canvas of simple beats, riffs, and melodies to experiment with the conventions of pop and rock. But where Menomena often feels distant from their conclusion, Your Anchor has a razor-sharp focus to the songs. Only one track here hits the four-minute mark, the lush "Ask Permission," and that's really just to let the established groove sink in. While Menomena tracks tend to sprawl out into artistic exercises, Seim trims the fat mercilessly. Opener "Chest Pass" breaks into an intricate drum beat that drops off right at its peak, cold cutting into "Fire Trial's" simple bass line and omnipresent synths. Instead of building an exquisite corpse of a pop song, Seim goes with a basic, minimalist approach.

These more basic tracks on Your Anchor also tug on your emotions more than Menomena's complexities, such as National cover and album closer "Fake Empire." With a breezy synth behind the Seim's bare voice, Danny's vocals want to sound apathetic and detached, like a Portland hipster on a fixie bike, but the facade doesn't last. When he begs the focus of the bass-heavy "You Can" to swim to him, his mask of indifference morphs into a seductive whisper of scratchy acoustic guitar noodlings and an ever-present bass beat. It's sparse and yearning, pulling the listener in for a conclusion that never comes. That sparse quality, the way the bass notes wander in and out of each track, is the musical equivalent of the perfect "Come Hither" look, beckoning you to come just a little closer. Follow that urge.