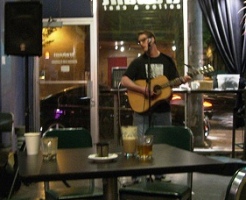 Your Favorite Book: Long live the hype (or lack of it)

Last Friday, while the city of Seattle was faced with the daunting task of choosing between the see- them- now- before- they- go- on- tour- with- Modest Mouse- and- hit- it-big Grand Archives, KEXP-hip Cloud Cult, or the sorta secret United State of Electronica show, I opted for the road less traveled with Your Favorite Book at a University District coffee house.

Trabant Coffee & Chai was filled out with students working on laptops and discussing final-exams – not a place a buzz for an evening show. It was the antithesis of a usual Friday night show going environment, as I had a comfortable, well-lit table at my disposal and tasty warm chai latte beverage in hand.

As 10pm hit and patrons’ laptop battery power dried up, folks started to head out for their ‘official’ evening festivities. Patrick, who is Your Favorite Book (he takes a nod from other singer-songwriter types like Mountain Goats/John Darnielle and employ a group-ish name for a singular entity), took a place at the front of the chaihouse and began the 25 or so song set. This would be a lengthy undertaking for a band at the Crocodile, but a reasonable set for someone whose job it is to entertain folks toiling away on blogs and term papers. And for someone who has been counting down to tonight’s show and listening to the new Your Favorite Book CD religiously, it was a welcomed surprise.

Hearing the songs performed live, they took on a whole new sense of passion and tranquility as the songs veered from poetic jabs at relationship missteps (“Sparrows, Sparrows”) to interpersonal solace (“Cold”). The peaks were compounded by the tenacious acoustic guitar strums which built a path for the bookish winding narratives he astutely sang without abandon. As he made his way through the set, he introduced a brand new song (interesting given he *just* released a new album), played older songs from his three-album back catalog, but mainly focused from tracks from the new album, Scotch Hog. Among all of the intrinsically affective moments, my favorite point in the set was when he launched into “Fire” with its slight ebb and flow twang and softly repeated line, “I love you, unforgiveably.”

The evening reminded me of the story about the time Neutral Milk Hotel opened for 764-Hero and The Supreme Dicks at the Backstage (which is now a fitness center around the corner from Cupcake Royale in Ballard) on July 6, 1996, on the On Avery Island tour. Because no one had even uttered the words “In the Aeroplane Over the Sea,” the place was about half full (with mostly 764-HERO fans). As the story goes, the show was as brilliant as you’d think: some songs were debuted from the subsequent Best Album of All Time, and the performer – in his pre-overwhelmingly critically acclaimed days – was at ease with the audience. For those of us who dwell on this kind of thing, the evening is the reply for the timeless last call conversation topic: If you could go back in time and do one thing…

A main ingredient of such blissfully recollected events is hype. Although hype has a negative connotation because it is usually associated with undeserving bands, there are some cases in which hype is given to worthy endeavors (i.e. the Stone Roses, Wes Anderson films and, of course, Neutral Milk Hotel). Hype gives things substance and an inherent worth (i.e. “cred”) for the masses. It's a nearly unexplainable phenomenon that you can love or despise, but you can’t deny it adds weight and status to recollections.

What separates this show from that 1996 NMH show isn’t substance (unless you count that part of the 1996 NMH show when the guy from The Supreme Dicks dropped his pants and ran around the venue with the nuts and berries in full view); rather, it's that it hasn’t been labeled/hyped by some tastemaker to the masses as being historically significant. Just like my friends at the NMH show, I sat at this show wanting to call everyone on my phone tree telling them to get there soon so they could fill with the joyous feeling of the poignant moment.

If in a few months/years, Pitchfork finally picks up a modestly packaged YFB CD on a whim and discovers its intricacies and spews online about it, we’ll be sharing space at the next YFB shows with folks who will listen to us compare this 2007 coffee house show to that 1996 NMH show.

Long live the hype, or lack of it.