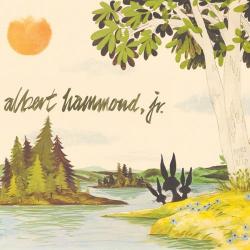 Well, who'da thunk it? When most people think of the Strokes (and who thinks of them much these days?), they think of Julian Casablancas, the spindly frontman of the band. So, it probably comes as a surprise to many that their rhythm guitarist, Albert Hammond, Jr., has recorded the best Strokes-related anything since Is This It?.

Son of a 70's pop-rock star (who wrote “To All the Girls I've Loved Before” (!)), Hammond does an excellent job of crafting pop gems thats sound like a cross between his usual band and defunct indie pop stars like Papas Fritas and the Push Kings. There is a little bit of everything on Yours to Keep, and most of it works remarkably well for the first solo album of the hitherto unheralded axe-man.

Almost all of Yours to Keep is populated by horrifically catchy pop songs. Even the somewhat slow and dreamy lead number, “Cartoon Music for Superheroes,” with its toy piano melody, has an infectiousness to it, like a more rocking Brian Wilson song. From there on in, it would be hard to miss that Hammond is a member of the Strokes. “In Transit” sounds like an outtake from Is This It? except that Hammond, unlike Strokes' frontman Casablancas, doesn't sing monotone and lifts the song out of the odd lethargy that can debilitate many Strokes songs. This continues “Everyone Gets a Star,” a song that might be too poppy for its own good, but good luck not wanting to hum along with this near-pop-punk ballad. It's hard to tell sometimes whether the fact that it sounds so familiar is a bad thing. Hammond doesn't just mimic the Strokes, though. Songs like “Blue Skies” are much more Beatles-influenced than anything the Strokes have ever recorded, almost bordering on straight-up Brit rock. However, he knows his strengths, and on “101” he delivers the best Strokes song they never recorded. You can't help but tap your feet along to the rhythm as the guitars and vocals follow each other in the chorus – it's like “Hard to Explain” if it was fully produced rather than garage-banded.

Where Yours to Keep gets really interesting is the second half of the album. “Call An Ambulance” is perfect 60's/70's pop rock, sounding like it lost it way from Papas Fritas, right down to the ukulele and whistles. This can also be heard on what might be the high point of the album, “Hard to Live in the City." It starts off as a driving rock song that suddenly morphs into a downright anthemic pop song with a full-blown horn section (no pun intended). The song just sounds and feels like summer fun with the same energy as the best tracks from the Push Kings' masterpiece Far Places. Hammond is at his most dynamic on “Scared,” a song that oscillates between a Strokes-like post-punk song and a Beatles-like melodic ballad. He meshes the sounds with the skills of a rock veteran, like Matthew Sweet revisited. With all this, you can forgive Hammond for a few duds, like “Bright Young Thing”, whose flute loop might make it a little too Fleetwood Mac-like and “Holiday,” which just sounds like uninspired album filler (along with the 'extras' like “Postal Blowfish” and “Well… All Right”, a downright gratuitous Beach Boys knockoff.)

Listening to Yours to Keep, you can't help but wonder what the Strokes would be like if Casablancas didn't run the show like he does. I suppose that's what solo albums are for, and Albert Hammond, Jr. delivers a remarkably strong debut for a guy that most of us know best for keeping the rhythm for another band. It's not too likely that Hammond will eclipse the Strokes impact on the music scene, but he sure does prove that he has the chops to make it on his own if his band calls it quits.