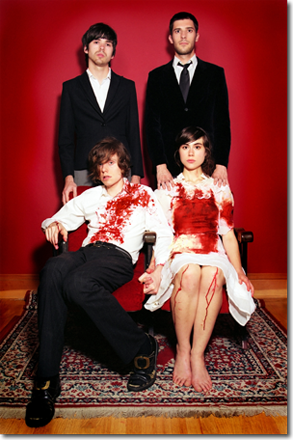 Zac Pennington of the Parenthetical Girls recently sent downloads of his band’s absolutely delightful “mini-LP” adapting Scottish poet Ivor Cutler’s imagery to their idyllic blend of artful electro-pop. I fell madly in love with the eight song cycle, and begged Pennington to answer some questions as he takes in the Old World on the eve of the Parenthetical Girls’ holiday seven inch announcement and the limited availability of The Scottish Play.

How’s it going in Europe? Are you on tour there?
Europe is unsurprisingly delightful. I’m writing from a hotel room in Vienna, where I’m presently on something of a business trip—Parenthetical Girls have been working on a collaboration with Seattle-based theatre ensemble Implied Violence that we’ll be staging this spring in Austria, and we’re here dealing with some logistics.

What is this release, in format? It’s a ten inch white vinyl EP available in Europe, right?
The Scottish Play is primarily a limited edition 10″—500 total—released on Tomlab Records in both the US and Europe. It’s also available digitally.
Any plans for Tomlab to release it as a CD-EP here?
Nah. We’re mostly interested in music as a fetish object.
It’s called The Scottish Play. Is it actually part of a play?
The title comes from an infamous superstition regarding Shakespeare’s MacBeth—a play which is said to be plagued by a curse. The superstition suggests that merely uttering the name MacBeth during a theatrical production will doom it—hence The Scottish Play. It also doubles as a terrible pun.
Did you write the gorgeous melodies yourselves on this release, or are they from another music adaptation of his work?
Cutler’s lengthy discography is populated mostly by records that mix his prose poems with his (lowercase) minimalist songs—our adaptations all take their basic cues from Cutler’s original recordings.
How did you come to discover the writing of Ivor Cutler? And how would you describe his appeal to someone not familiar with his writing?
I came to Ivor Cutler originally by way of a couple of other musical touchstones—namely: his brief appearance on Robert Wyatt’s Rock Bottom, and Jim O’Rourke’s 1999 cover of “Women of the World.” Cutler’s work is simple, smart, hilariously absurd, and profoundly Scottish.
Who plays the music on this release? And where and when was it recorded?
The Scottish Play was our last official recording with our long-time four piece outfit of myself, Matt Carlson, Eddy Crichton, and Rachael Jensen. We recorded it in fits and starts in our respective basements and living rooms in Portland through 2008, but only really properly finished it in early 2009.
Were these four spoken word, four song selections all that you recorded for this project?
Yeah–we had a fairly clear idea of the shape the EP would take from the onset, and these 8 particular selections suited that modest arc cohesively.
Your long-time keyboard player recently left. Have you been writing songs since then for the next full-length? Any plans that way yet?
Actually, we just completed tracking the second in a planned series of EPs that will ultimately comprise our new record—the first EP, Privilege, pt I, is planned for a January release on my own Slender Means Society vanity label. We’ve yet to finalize our plans for the subsequent releases, but details should be surfacing soon.