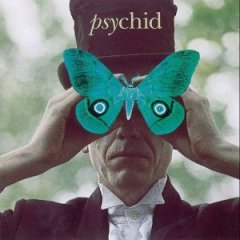 Personally, I never cared much for Kid A and consider it one of the most overrated albums ever — but hey, that's just me. But what if they had tried to include more technowizardry in album no. 4 whilst not losing sight of a good tune and abandoning Thom Yorke's lovely, soaring rock vocals? Well if you yearned after such, then Psychid might just be for you…

Psychid is the eponymous debut release by four lads from Oxford, all 23 years old, and whose mature blend of mellow rock with electronics and general weirdness got them a support gig for Radiohead, and off the ball went a-rolling.

So, first lets just get those Radiohead comparisons out of the way — yes the influences are clearly there — both musically and through Tom Havelock's Yorke-esque vocals. But Psychid are so much more their own band than that, and their brand of mellow rock really hits a sweet spot left wanting by the recent direction taken by much indie rock around these days. The album opens with 'Split lip sucker', it's minor-keyed acoustic riff developing into a beautiful lament for cold, dreary days, with lines like "Fold me and store me away/Feed me the dust off the hay/Twist my arm and hold me down/Gray end to a gray day."

Following 'Wires ripped out', Psychid's most Radiohead-like song (circa their 'Airbag' era) comes the slow and deliciously-building 'Moonshine', with the guitars gradually layered over drum machine and electronic tweaking, through the ethereal "Moonshine is better than sunshine" chorus, to a glorious rock crescendo. On 'Digging for Victory', Psychid start off with an 80s Kraut-rock lilt a la Kraftwerk, before it seamlessly mutates it into a beautiful, yet eerie synth-pop anthem, decrying our laying waste to our world.

Other gems include 'Jezebel' and 'Burning Boy', where 'Jezebel' is the closest Psychid come to delivering a standard gentle rock number, while maintaining the overall pleasant yet slightly disturbed feel of the album, with strange, disjointed lyrics like "I'm vulnerable when my brain gets tired/A stack of books in our house on fire" — oh and rousing middle eight that whets your aural appetite just enough to leave you salivating for another taste. On the other hand, 'Burning Boy' consummately fills the trend these days for the obligatory-slow-song-at-the-end-of-the-album — only with Psychid's personal twist on the genre.

All in all, I've grown to love Psychid, and think it might be just the ticket for many indie rock fans looking for something new. After all, Psychid are pretty much unknown in the US. Hell, amazon.com don't even list their album even as an import (last I checked) — shame on them! Buy British! (amazon.co.uk).