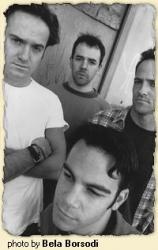 The Wrens in NYC

When I first heard about The Wrens, I was curious — a band from New Jersey that I'd never heard of? AND they have albums titled The Meadowlands and Secaucus (one is a stadium, the other is a town)? How could I have missed that? I am pretty down with the scene, I love both Bruce Springsteen (Freehold, NJ) and Ted Leo (Bloomfield, NJ)! I can also name off essentially every rock band with roots in New Jersey (Bon Jovi, The Feelies, Yo La Tengo, Pavement — hell, even Elliott Smith lived here for a while). The article went on to explain their musical history: gonnabees turned worker bees, then simply being during the six-years spacing the two albums.

Listening to the Meadowlands makes me feel wistful — the first time I heard it, I was ready to discount it as a hyped out indie-rock album that I was suckered into buying because I saw that Pitchfork gave it like a 9.5 rating (usually the albums I like get a 6.0 or lower rating). But I kept listening — and then my roommate started to listen to them — and it was getting to the point where if someone played the Meadowlands as I walked into the room, I'd wonder, "Who is this? They sound so familiar." That's when I realized I really liked this album.

This night is especially and appropriately Jersey'ed out — not a surprise given that all three of the bands are pretty much part of the New Jersey scene. Everyone at Maxwell's knows each other — they've played in bands with each other, taught guitar to some, partied together, gotten drunk with each other, etc. It starts with The Rules (who I missed, but man is their lead singer a hottie-and he has a bed like clouds!) who are followed by the power-pop trio True Love, but when the Wrens perform, something comes alive.

They open with the first track on The Meadowlands, "The House that Guilt Built," a twinkling spaced-out guitar taking the place of the cricket chirps on the album, and the clapping starts — appreciative, happy, joyful clapping. It's a Welcome Back Kotter-type of homecoming for the band (remember, Hoboken is home turf) and the world seems to be balancing on a star, until they slam right into "Per Second Second," and the hooting and the whistling starts. I am sandwiched in the back with the merchandise (luckily I know the girls "manning" the merch table, and actually find myself selling merch more than once!). Maxwell's is packed and because it's mostly men are here, it's hard for a girl to find enough room to squeeze on through to the front.

But back to the show, the crowd is feeling crazy, the frenetic energy is building, multiplying and Greg Whelan seems to have channeled spirit of the recently departed Captain Kangaroo, jumping around the (small) stage, leaping like a man who just discovered how to use his legs. They take requests from the audience (yup, someone suggested Freebird), they break out into a cover — "Your Love" by The Outsiders — until the song dissolves in giggles (who knew grown men still giggle? I thought only the girls in The Sleepover Club dissolved into giggles!). They are full of giddiness — they explain later on in the set that they always clap in between songs because in the past, that was the only clapping that they heard during a set — but tonight, the boys in the audience are throwing the goat, and pumping fists in the air — call it "clappiness!"

Or obnoxiousness — because as they said, "We're from fucking Jersey! You're allowed to be obnoxious tonight!"

During the set, I wished that I could've pushed my way past the flannels and the trucker hats, and been up to the front of the club to look back at the audience like Amelie does in movie theatres so that she can witness rapture — and that is what tonight feels like.