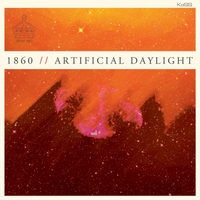 I am obsessed with Artificial Daylight, the second album from the independent Icelandic folk-pop band 1860. Far from a sophomore slump, Artificial Daylight draws inspiration from the same well as Fleet Foxes and the Waterboys, hitting the sweet spot between artsy-fartsy indie and totally accessible pop.

When I talked to them last year, the boys in 1860 were still chafing at a reviewer’s classification of their debut album, Sagan, as “mom-friendly pop,” and promised the follow-up album would be “dad-friendly.” With Artificial Daylight they have indeed delivered a more aggressive sound – thicker production, demanding drums, and guitar leads that have largely supplanted Sagan’s mandolin.

The sound has advanced from echoes of the thirties to a more seventies vibe, with chewy, funky bass lines (the one in “Socialite” is a high point) and proggy-sounding guitars scattered throughout. The period detail on “Blue Ease” is so convincing it makes swallowing blue pills and slipping into a hot tub with naked strangers start to seem like a good idea.

Fortunately for Iceland’s moms, the harmonized choruses and mandolin still show up, and nice-guy vocals keep the nerdy folksters from 1860’s debut recognizable. While Sagan was evenly divided between English and Icelandic, everything on Artificial Daylight is in English except for one verse of “Iðilfagur.” Besides making for a more coherent whole, this makes it easier for American listeners to appreciate the poetry. Although the Icelandic sounded great, these lyrics offer so much more than texture. I’m convinced that the secret of life is hidden in opener “Go Forth,” and “Bastion (It Matters)” hides a tragic relationship post-mortem in its upbeat rhythms.

As a band, 1860 is a lot about ideas, and I don’t just mean musically; they quote Voltaire on their Bandcamp page. Sagan was almost too clever for its own good, but Artificial Daylight has a few nerd-takes-off-the-glasses moments of emotional exposure that change everything. Sometimes, as on the loin-girding “Cold Winter Nights,” in the sorrowful beginning of “Bastion,” and the almost sobbed refrain in “Surrender,” 1860 is starting to show some feelings. The parfait layering of smart with heart is irresistible.

Artificial Daylight is an album that both the mamas and the papas will love.

{You can stream and purchase Artificial Daylight on Bandcamp and gogoyoko now, and it will be available from Amazon in a few weeks. If you must have a physical copy, go here, but be warned, international shipping from Iceland is slow and unreliable.}