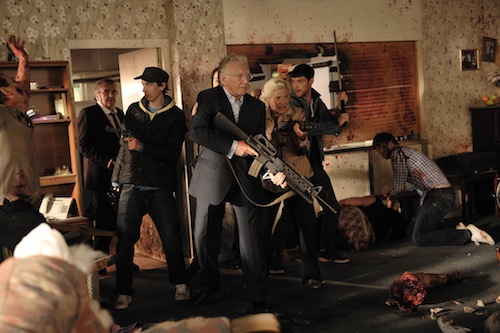 One of the most fun films I saw at SIFF this year was the Adventure/Horror film Cockneys Vs. Zombies, and I got to sit down and talk to Director Matthias Hoene (my people!) about the making of the film, which was REALLY AWESOME. Really, really, really awesome. Like, I could talk to this guy all day about horror films awesome. Why don't you live here, Matthias? SERIOUSLY.

Anyway, Cockneys Vs. Zombies was released on VOD August 2, so you can still find it there — and Matthias said he "hopes" the DVD will be out by Halloween. Fingers crossed!

TIG: Let's get into your inspiration for the film! Did you grow up loving zombie films?

Matthias Hoene: Well, my love of zombie movies started when I was given a grubby old VHS tape, which only had "Dead Alive" written on it …

Matthias: … And it was a film at the time that was sort-of banned, so I watched it "illegally" in my living room after my parents had gone to bed. And I was just so blown away by how gory, yet funny, it was. And I really loved the film!

And of course, Evil Dead 2 was one of my big influences. I loved all the Sam Raimi films — even Army of Darkness, I thought was great. So I think it was those films that inspired me and made me really want to do a zombie film. So those were my early influences, and then later on I really loved films like Terminator and Aliens, and Delicatessen … which had sort of this quirky meets big blockbustery thing. But when it came to making this film, I was more thinking about the Dead Alive and Evil Dead-type movies.

TIG: Right, more of a comedy meets horror vibe, which was really evident in the in-jokes throughout your film. I really loved the old guy with a walker out-running the zombies! Do you have a bias against fast-moving zombies?

TIG: Well, sure! And there's a still an element of scariness, since you could still get bitten at any time.

TIG: I also really liked that you had fun with the rules — how some people knew exactly what to do from watching zombie movies, and some of them were completely oblivious.

Matthias: Yeah! We tried to be sort of different and not play the same old cliches. When I came up with the film I was working with a couple of Cockney actors on a web series, and they were faced with a supernatural enemy. And unlike any other character, they just didn't get scared. They were just, "Alright. Okay. We'll just take our shotgun and blast away! Have some of this, handsome…"

And I thought it was just such a funny attitude that I hadn't seen in a horror film, this blasé, not scared protagonist. And I thought, let's make a movie of that! I knew horror was a busy genre, and there were lots of gangster films, but I felt there was a small niche where you could meld a gangster movie with a zombie movie in East London, which is to me, like an adventure film with zombies. That's what I latched on to. That, and the "Zombies are slow, but the Pensioners are slower."

Matthias: I kept trying on to layer things we haven't seen before. And not do the whole "OMG, what is it? Zombies?!!" and have everyone figuring it out … I just wanted to get on with it! Okay, it's zombies. Let's run with it.

TIG: That was great! And one of the best things was watching the residents of the retirement home opening fire on the zombies. Was that what you had in mind right away? The older people laying waste to hoards of hungry zombies?

And then with the luck of casting Honor Blackman … with a machine gun! That was just hilarious to think about. It definitely was one of the very early things that made me excited. And I couldn't help but put a big old score in there, with brass and drums and the whole thing to make it really heroic and fun.

TIG: It was really fun! Super fun. And since I love splatter, I was appreciative of all that blood and gore you put into it. It looked like you used mostly practical F/X, or at least it was hard for me to tell where the practical needed and the CGI kicked in.

Matthias: I'm really happy I managed to pull some wool over your eyes! You can't always use real blood in terms of shooting time. Once you put a squib on, it takes about an hour, and then you fire and if it doesn't look any good you have to change the clothes, wash them, put it all on again and by that time you're already out of shooting time.

So what I did was shoot real F/X, matching the angle so it would look real. And the post-ops did a great job of putting that all together. That said, that was mostly for the secondary F/X. All the main F/X were mostly done on camera, for sure.

TIG: I noticed that you left it WIDE open for a sequel! Was that planned? Or just a way to book-end it and wrap it up?

Matthias: Well, I didn't want to have the normal zombie film ending; I wanted to have a more typical adventure movie type ending. So I left it open for a sequel, but unless people are really, really, really, really, REALLY asking for it — I'm not gonna do a sequel. Because I feel like I put everything I wanted to say about zombies into that film. And I don't know if I want to do another one. [shrugs] But … you never know. It's nice to make a film and just leave it as is.

Matthias: At the moment, I'm listening to Little Dragon, Ritual Union. I like a mix of indie music and electronica. And I'm a big fan of Crystal Castles!

Matthias, you are awesome, and I ♥ you! Can't wait to see what you do next.