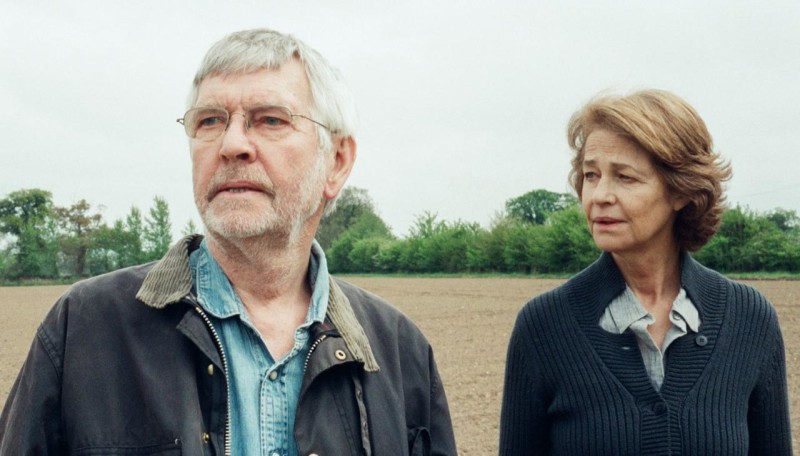 {45 Years opens in Seattle on Friday, January 29 and is screening at SIFF Cinema Uptown}

Hey friends, lets imagine that you’ve been with your romantic partner for 45 years. FORTY-FIVE YEARS. Then lets imagine that your partner had a previous partner who died mysteriously before you met them, and that the previous partner’s body was found frozen in ice (and time) mere days before your 45th wedding anniversary celebration … that then sets off a chain reaction of revelations on your part, in which you find out that your partner might not have been telling you the exact and whole truth this entire time.

Do you feel a little like you’ve been punched in the gut? Yeah? That’s exactly how watching this movie will make you feel too. There are many “holyshitIcan’tbelieveshe’sfindingoutallthiscrazystuff” moments, revealed very, very, very quietly — as in, no shouting, no throwing of things, no dramatic exits — you just see everything slowly register on Charlotte Rampling’s face as each bit of new information crumples her stoic resolve just a little bit more.

So you’ve got Kate Mercer (Rampling) running around and planning a grand party to celebrate all their years together while also struggling to understand if she’s just been a poor replacement for her husband’s ex. Then you’ve got Geoff (Tom Courtenay), doling out pieces of information one at a time while still continuing to sit on some HUGE secrets — sometimes acting confused as if he can’t remember; sometimes sneaking around in the attic being downright creepy.

And yet even though it has elements of the familiar, this film doesn’t feel anything like a traditional thriller; the beautiful thing about 45 Years is its unique ability to keep you guessing about, well, everything, without ever revealing the whole truth. Really, Rampling’s face is the only thing you need to pay attention to because every heartbreaking moment of the story plays out right there. Best Performance by an Actress in a Leading Role-worthy indeed.

They asked me how I knew
My true love was true …