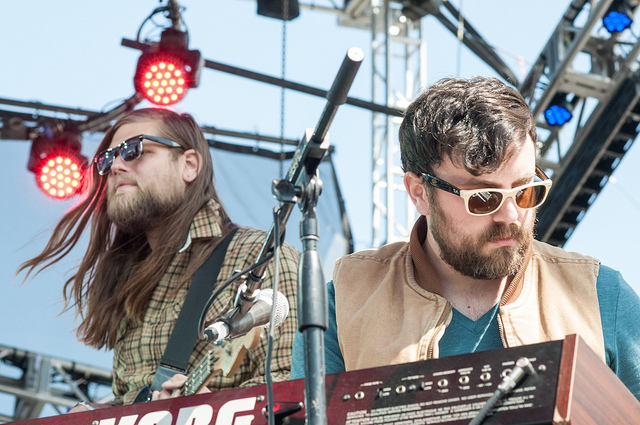 Another year, and another weekend at the Gorge is upon us! That's right — this weekend brings with it our favorite northwest festival season opener, Sasquatch!. Running this year from Friday through Sunday (and thus avoiding the whole, "I really should have taken Tuesday off from work!" mess), the 2014 lineup is no slouch, with a little something each day for everyone. So, without further ado, here are our cream-of-the-crop picks for each day of the fest:

The day starts off with a bang from the barrier in front of the Yeti Stage, where you can catch Old 97s frontman Rhett Miller noodle through classic favorites and hopefully a spin through the new record the band is touring behind. (KEXP has been spinning "Most Messed Up," the title track from the most recent Old 97s album, and We. Are. Loving. It.) After a dip by the mainstage and a few comedy acts, the night runs back-to-back with killer sets from Phosphorescent, Foals, Phantogram, and Damien Jurado — and that's just the tip of the iceberg!

Check out the day's schedule here, and our recommended stops below:

Day two out at the Gorge gets rolling with one of our favorite east-coast-turned-Seattle bands, Pela We are Augustines Augustines down on the mainstage. They'll bleed nicely into vibes from First Aid Kit to warm up the afternoon, followed by what we're sure will be the sleeper hit of the weekend, Jonathan Wilson (who is up the hill on the Yeti Stage at 4:10pm). Wilson's "Can We Really Party Today" has been a mixtape staple since Fanfare's release last year, and we can't wait to get a taste of what depths he can go to live! We'll be spending most of the rest of the night on the genre-rollercoaster down on the mainstage, with sets from Violent Femmes, Neko Case, and the National, among others.

Saturday's full schedule is here, and our can't-miss sets of the day are as follows:

Finally, Sasquatch! goes out with a bang on day three, with strong performances start-to-finish. Make sure you get up early to take in our new favorite Barsuk band, Big Scary, at 1pm on the Bigfoot Stage, and follow the closing-day vibes up and down the hill with Shelby Earl, Tune-Yards, Elbow (!!!), Bob Mould (!!!!), Rodriguez (!!!!!), Big Freedia (!!!!!!) and the perfect cap to three days in the dust and (hopefully) sun, Queens of the Stone Age. If that lineup doesn't melt your face off, honestly, we don't know what will.

Follow our stops (below), or, build your own Sunday schedule here.

We'll see you out at the Gorge!

{Photo of Damien Jurado's band by our very own Imaginary Victoria.}