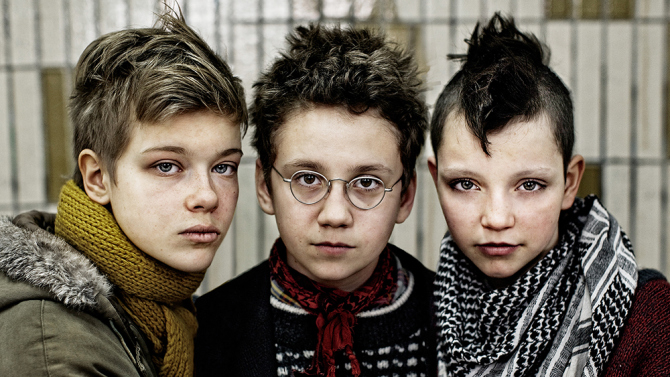 SIFF Review: We Are the Best!

If you’re free for some SIFFIng at 4:30 today, I’ve got one to recommend highly. We Are the Best! follows 3 teenage girls through roughly a school year in 1982 Stockholm. Despite the age of its protagonists—13, all—and the fact that instruments are involved, it’s not really about Growing Up, or Finding Your Voice, or even Putting On The Best Show Ever. It’s not there to judge teens (“Whatever happened to respect, young lady?”) or deify them (Bueller? Bueller?) or hold them up as adorably limited or precocious mini-humans so we can all be glad we’re past that. Director Lukas Moodysson (Lilya 4-ever) treats teenagers are interesting on their own terms, as characters who needn’t be conscripted as metaphors. It’s a poignant and insightful movie. With 13-year-old girls.

Bobo and Klara are best friends. Bobo is more inwardly drawn than Klara. She likes punk music—it makes her feel better—but she still has elephant-covered pillow cases. She has a sense of what she’s not, but wishes she knew more clearly what she is, and she can’t find a way to ease her malaise. Klara is much more self-assured and declarative: they are punks. Punk is not dead, she insists. She cares about nuclear disaster! And she certainly won’t let anyone tell her what to do.

Klara bushwhacks her way through life, alternately leveraging insight and indifference to get what she wants. Bobo is her ally and her confidante, but she’s has no influence over Klara except camaraderie, and Bobo begins to feel the imbalance more and more keenly.

Through a marvelously plausible set of circumstances, they find themselves forming a punk band. Except they can’t play at all, even by punk standards. So they enlist an obedient Christian girl with extraordinary guitar chops to join their band and show them the ropes. They all find that they can redraw their assumptions about one another fairly easily, but the dynamics between them get increasingly complex, particularly when boys enter the picture.

The film’s loose structure does build to a climax involving a performance, but the performance isn’t a metaphor for success or failure or growing up or transcendence. It stands on its own as a thing that happens, beautifully authentic but not tidy.