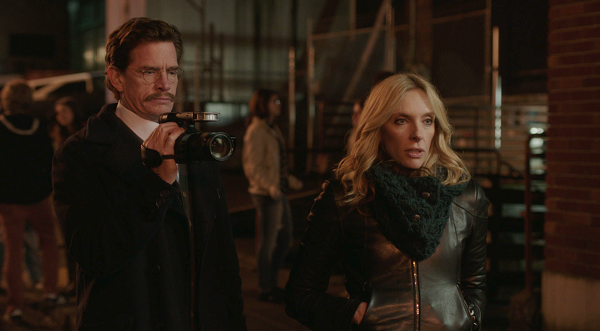 The complete opposite of the devastating Eden (SIFF, 2012), Lucky Them is a part comedy, part “eesh, I can identify with that” romance, but not exactly in the traditional sense of the word. Toni Collette completely kills it (like she does every. single. time. Yes, even in Hostages) as Ellie Klug, a Seattle music journalist employed at fictional magazine STAX, whose editor demands she find out what happened to her missing rock-God ex-boyfriend as the anniversary of his influential album approaches. As a reluctant Ellie starts her assignment, she runs into two men that complicate the task: Lucas Stone (Ryan Eggold): a talented, and uh, very good looking, young musician, and Charlie (Thomas Hayden-Church), a rich acquaintance who offers to finance her search in exchange for filming it.

Side note: how much would I love it if Oliver Platt actually ran a music magazine in this city? The answer is SO MUCH. So, so, so much.

While I admit imaginary embracey’s comments about some of the details of her job being fantasy-based are correct, it didn’t bug me much because of my instant connection to the character. Don’t misunderstand me; I’m not trying to claim that I have anywhere near the level of journalistic fame or skill that Ellie does in the film, I’m just saying: a female writer who hooks up with all the wrong people and pines after a long-lost love to the point where it sabotages her current relationships? That hits close (probably a little too close) to home. Also adding to the authenticity: I feel like I’ve met every single character in this movie multiple times. The first thing that occurred to me when Charlie appears on screen was, “Oh man. I meet that guy at every SIFF Opening Night party, every single year.”

Short story: I love this one as much as I love The Off Hours and Eden. It’s a completely different kind of love, but it’s still love. My heart is yours once again, Ms. Griffiths.

{Lucky Them screens at SIFF on 5/22, 7pm at the Renton IKEA Performing Arts Center for Renton Opening Night, and again on 5/23, 9:15pm at The Egyptian. Director Megan Griffiths & Writer Emily Wachtel are scheduled to attend both screenings}