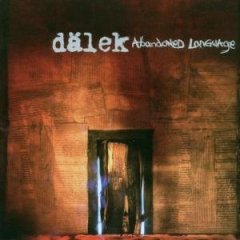 There is an awful lot of hip-hop out there these days. Now, I would be the last person to suggest that you should listen the opinion of a white guy from Boston when it comes to what is good and bad in the urban genre, but if there's one thing I know, it's what I like. Dälek's Abandoned Language is not the most ground-breaking hip-hop masterpiece in the world, but it definitely makes up some of the difference for the cookie-cutter krunk material taking up most of the radio airwaves these days.

My first real memory of Dälek was the CMJ Musicfest in 1998, when they had the honor of playing… the registration lobby. Being the naive, wide-eyed college senior that I was, pretty much my only opinions were "nice beat" and "exterminate! exterminate!"

Dälek worships on the altar of Massive Attack, Tricky and, to an extent, Portishead, producing dark and sinister atmosphere that are intertwined with low and rumbling verse — think something like a less caustic and more subdued DMX. This is best heard on the apex of Abandoned Languages, "Paragraphs Relentless," a track that arrives like an army of demons in a dark alley. The rattling bass that starts the song is joined by the most sinister, well, electro-bagpipes you will ever hear, whipping up the mood to a dark frenzy until the verse kicks in. Much like Dälek's previous songs, this record wasn't written to make us dance, unless by "dance" you mean "bob your head up-and-down with the beat" (maybe that's why it appeals to white guys like me). Dälek repeats this formula across the album, with varying success. The title track does a remarkable job of recreating that registration lobby experience, with chatter burbling under the beat as dälek spouts slogans like, "There ain't a fuckin' thing sacred nowadays kid." "Brick Crumble" captures the trip-hop of the mid-90's, mixing scratching and marching beat under Dälek's voice. The same might be said for "Tarnished," with Dälek referencing Osiris and Picasso while condemning the street lifestyle. The band has a gift of making their songs memorable, considering the melancholy/somber moods they evoke.

Admittedly, after a while you feel like you've heard one song, you've heard them all on the album, but a number of songs that defy the Dälek sound. "Lynch" sounds like it could have lost its way from a Clint Mansell/Kronos Quartet collaboration, with writhing strings over a paranoid soundscape. "Starved from Truth" has more variation, starting off stripped down until building into a semi-coherent hellspawn, weaving possessed, well, maybe oboes or Indian flute? It's hard to tell. "Isolated Stare" might be the best Portishead song in the last ten years (because God knows there ain't been any others), with a cinematic feel wrapping the beat. The album closes with a the slightly more upbeat and energetic "(Subversive Script)," making you wonder why Dälek doesn't try this more often as the song descends into a cloud of noise.

The landscape that Oktopus and Dälek paint is bleak and relentless, like a post-apocalyptic nightmare that really doesn't have an end (and with that, they seem to live up to the reputation of their namesakes.) Dälek could use to vary their formula from time to time, as tracks like "(Subversive Script)" attest to, but there is just something appealing to the driving beat that accompanies you throughout the disc that isn't surrounded by unnecessary skits and other distractions that afflict many hip-hop albums these days. You're not going to be seeing Dälek on TRL anytime soon (well, unless MTV goes mad and start, you know, playing good music), but they're a breath of fresh, well, evil air.