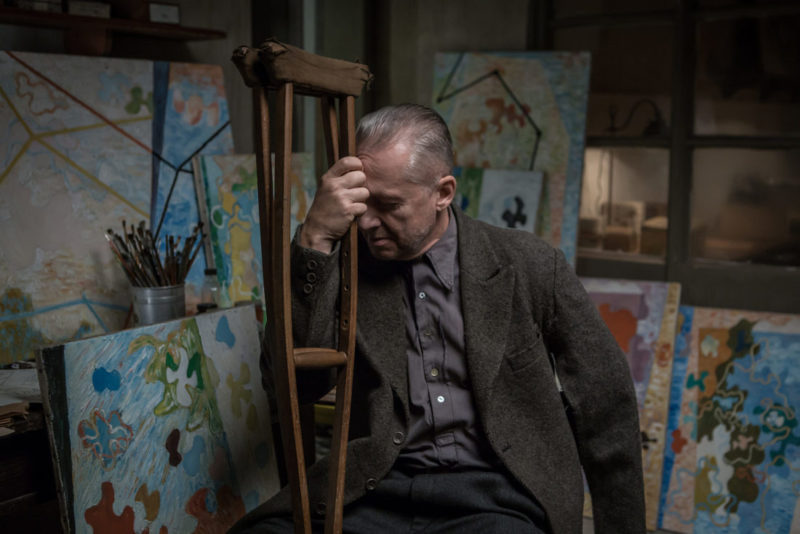 Legendary Polish director Andrzej Vajda passed away late last year, just after the release of what turned out to be his last film, a beautiful and humane picture called Afterimage. It tells the story of Władysław Strzemiński (Boguslaw Linda), who is still one of the most renowned Polish painters of the 20th Century, as his life was systematically dismantled by the rise of Communism in Poland.

Much as a hymn might be deeply spiritual and at the same time about spirituality, Afterimage is artistic while commenting–indeed, at times quite literally lecturing–on art itself. In some moments the film revels patiently in the painstaking moment-by-moment creation of art, and in others offers a dizzying array of pieces on a spectrum of genres and indeed of merit. Strzemiński teaches his students, who believe they can absorb some of his brilliance by elbow grease and proximity, to compromise only in the service of conviction to the work, to the image, to the story.

Vajda uses his medium to tell the story of another, which tells the story of a moment in time. A man with only one leg and one hand sits upon a cheap apartment floor in the grey afternoon light, mixing paint on a china plate, just so, just so. He reaches to the blank canvas, brush poised. In an instant the room is bathed in red light, all chromatic nuance obliterated beneath the monolithic hue that’s saturated the very air. What is this red light? It is a banner, stories tall, depicting Stalin, master obliterator of nuance.

Strzemiński heaves himself up with his crutches, and with calm purpose, tears a hole in the fabric to let the light back through. And so it begins. Strzemiński cannot, cannot compromise what he knows to be true. His life’s work: to interpret the afterimage burned into your eyes when you see something into something that communicates that moment, that image, that expression. Political ideology can make you unsee what you’ve seen, but art is a means of resisting that pull.

My fellow Americans, this has not yet come to pass. Our country is in turmoil, and “they” as much as “we” fear for our values and for the safety of our neighbors, if not ourselves. This, though, this has not happened. Heads of state may condone, but they do not command. Afterimage is about art, and art, the film declares, is as pure an expression of courage as may be made. It is an art to lay bare and vulnerable what one sees and what one knows. Vajda offers an afterimage of what such courage may look like.