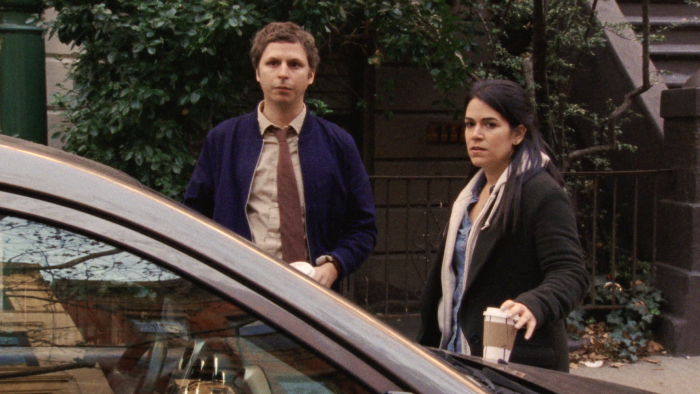 Week two approaches! Among SIFF’s must-sees on tap through June 1: a gorgeous animated fairytale about a handless girl, a refreshingly old-school New York indie, and a gut-punch of a documentary about a citizens’ resistance in Syria.

The Girl Without Hands
{5/27 11a Egyptian; 5/30 6:30p Uptown}
One of the many Grimm-collected tales that don’t really lend themselves to Disneyfication, “The Girl Without Hands” concerns a father who sells his daughter to a demon in exchange for outrageous riches. The demon finds that the tears shed by the daughter have made her hands too pure, and he orders the father to chop off the offending appendages so he can successfully disappear the girl away to an unknown dark destiny. Even though mutilation isn’t within the scope of the original agreement, the father agrees to this… because, riche$. The demon then finds that the daughter’s additional tears have made even her stumps too pure, and determines that these ridiculous purifying tears are just a non-starter. So, too bad, the daughter cannot be his after all! The demon throws his demony hands in the air and vanishes, and the daughter, who has no hands to throw in the air, nevertheless decides to get the fuck away from Daddy. And this is really only the tale’s exposition. Here we have a beautiful adaptation, in which French animator Sébastien Laudenbach employs a gorgeously minimalist, hand-crafted style, combining visual abstraction with the tale’s innate narrative harshness. It’s 76 minutes of sublime pleasure. Don’t miss it.

The Hero
{5/27 4p Egyptian; 5/28 1:45p Pacific Place}
Amie previewed this film and related event already; I’m adding my praise now. Sam Elliott re-teams with director Brett Haley (I’ll See You In My Dreams) and gives a lovely performance as an aging Western TV/film actor whose cancer diagnosis leads him to some long overdue life changes. A great supporting cast (Krysten Ritter, Laura Prepon, and Nick Offerman among them) add texture and humor to the bittersweet story.

The Midwife
{5/30 9p Lincoln Square}
A gifted midwife (Catherine Frot) is contacted by her father’s free-spirited ex-mistress (Catherine Deneuve), who seeks a reconnection after 30 long years. The events that follow make for a beautifully rendered, briskly-paced, occasionally funny, frequently astonishing interplay between two screen legends. The French title of the film, and the French word for “midwife”, is “Sage-Femme” — literally “wise woman”. This speaks to situations in the back half of the narrative; be sage and discover it for yourself.

Person to Person
{5/28 9:30p Pacific Place; 5/30 3:30p Uptown}
Endearingly old-school NYC indie about a day’s worth of dilemmas — some related, some not — for a variety of characters (portrayed by the likes of Abbi Jacobson, Philip Baker Hall, and Michael Cera). Each one of the film’s wonderfully wry 84 minutes is a little expression of love for workaday Manhattan, its independent businesses and urban hassles and bodega shopping and life debris. Such a joy.

Two Irenes
{5/25 9p Lincoln Square; 5/30 6p Uptown; 5/31 4p Uptown}
A quiet 13-year-old girl named Irene, dealing with a full-of-herself older sister and general feelings of adolescent awkwardness, discovers that her father has a second family nearby — and a confident, independent daughter also named Irene. There’s a lovely delicateness to this coming-of-age tale; it’s pure pleasure seeing the Irenes’ friendship blossom. (And, in case you were wondering, the mother/whore paradigm is in full effect with her dad’s situation.) Definitely worth a look.

Band Aid
{5/28 4:15p Pacific Place; 5/29 5:30p Uptown}
Uneven indie musicomedy about a married couple in their 30s (Adam Pally and writer-director Zoe Lister-Jones) who replace their therapy sessions with garage jams; they channel their passions and problems into pop songs. The married misery/bliss as portrayed by the leads provides funny moments, especially when Lister-Jones is joined by showbiz friends (Fred Armisen, Retta, and Colin Hanks make lasting impressions), but not enough laughs to carry 94 minutes of runtime.

Finding Kukan
{5/27 12p Uptown; 5/28 7p Pacific Place; 6/2 4:30p Ark Lodge}
Filmmaker Robin Lung encapsulates a 7-year effort to uncover the remarkable story of Li Ling-Ai, the un-credited female producer of Kukan, a 1941 Oscar-winning documentary (long believed lost) about WWII-era Chungking. Every aspect of Lung’s film is well-intentioned, so it’s at the risk of being a total asshole that I must report the re-enactments include some not-great silhouette work and, um, interpretive dance. But Li Ling-Ai’s story is undeniably compelling, and deserves to be more widely known.

Hedi
{5/27 1p Shoreline; 6/11 6:30p Uptown}
The title character is a Tunisian salesman of French automobiles; he’d rather be drawing, though, and he dreams of a visual arts career. Also he doesn’t seem to be looking forward to an imminent (arranged) marriage. Days before the wedding he meets a free(r)-spirited adventurer who inspires a sort of personal rebellion. This is a well-acted and nicely-paced drama that’s ultimately not terribly new and only marginally inspiring.

Pyromaniac
{5/31 6:30p Shoreline}
Norwegian filmmaker Erik Skjoldbj‘rg (Insomnia) serves up a psycho-thriller based on the true story of a fire chief’s son who happens to be a… well, look at the title. Said firestarter Dag terrorizes his rural community with a series of increasingly dangerous blazes over the course of an otherwise lovely summer — and oddly enough the effect is quite chilling. Great sound design and photography stand out, even when the story burns far more slowly than Dag’s spectacular infernos.

Gholam
{5/25 6:30p Uptown; 5/26 6:30p Lincoln Square; 6/2 4p Shoreline}
Shahab Hosseini, probably best known for starring roles in the Iranian films A Separation and The Salesman, is no doubt an appealing performer, and it’s a pity watching his talents squandered on a narratively inefficient bummer like Gholam. He plays a cab driver living in London. An enigmatic past presents a conflict within the quiet life he seems to be aiming for. He’s in a lot of stilted, protracted, empty shots of walking and driving. True misery.