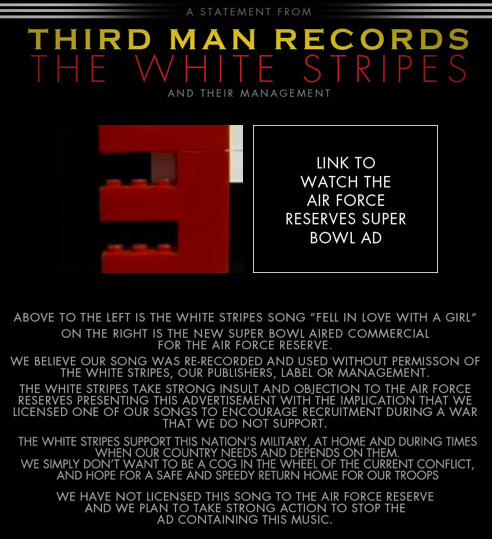 It’s no secret that I love and trust everything Jack White does. From his short drumming stint with Goober and the Peas, to anything White Stripes, to the recent Dead Weather album, I’m all about the JW love.

You can imagine my surprise when I heard the melody of the White Stripes’ “Fell In Love With A Girl” as the soundtrack to the Air Force ads that played during the Super Bowl ad breaks.  I never would have imagined he’d be into that sort of thing: White Stripes, Air Force? Really? Surely he must have signed off on the usage of the highly recognizable version of the song… but *why* would he? I was confused.

But then, today, AHA! I was comforted to learn that Jack actually didn’t sign off on it. Looks like the USAF used it with out his permission… and our dear ole Mr. White had a thing or two to say about it to clear up the matter! Go Jack!

As posted on the Third Man Records website today:

And now that I read his response … can you imagine the White family’s surprise when they saw this commercial as they crowded on their living room couch in front of the TV and chomped on their Super Bowl nachos?

Didn’t a similar thing happen in 2008 when the NFL used an Arcade Fire song during the halftime show with out their approval?  What is up with people?!