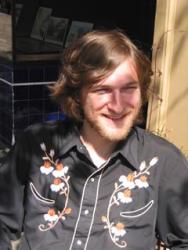 Generally singer/songwriters displaying their latest works makes me want to sit on my rug, consume my milk and cookie and take a nap. This is not the case with the imaginary love affair I am having with the music/voice of A.J. Roach. I think it's important to check the website of one of your favorite musicians weekly {sometimes even daily} if they're semi-eccentric and they live out of town because you never know when they might plan a surprise trip to Seattle. You have to be prepared for these things, right? I also think obsessive is a relative term.

My weekend {let's face facts, my MONTH} was made when I found out A.J. {yeah, that's right, we're on a first name basis. Well, a first initial/middle initial basis} was going to be playing two shows in Seattle at a house! How perfect was this, no security staff keeping me from the stage! Seriously, I was elated all day at work waiting for 5 o'clock to come, listening to his CD over and over again so I could be the cheesy front row girl lip syncing all the words. Ok, I didn't really lip sync the words, but I could have if the mood had struck me. It made me remember the days in high school when I would skip class after fourth period and drive to Detroit for a show. Except A.J. wasn't a 3-hour drive away, he was in my town. Ok, my CITY {I forget sometimes that I'm living in the metropolis of one of the coolest cities in America and I shortchange it by calling it a "town" or a "village"}.

Speaking of moving from a small town to a city, A.J. grew up in Virginia and currently resides in San Francisco. Now, I know you're thinking that I've done some crazy investigating or have been following him around the bay area or something, but he's a storyteller. I learned these things from his songs not by googling his name. And what a great storyteller he is. Have you ever seen a movie that was layered with comedy and well written tragedy that you would start to well up and then the lead actor would trip or say something incredibly funny? That is what A.J.'s shows are like. He tells these hilarious stories in between songs about his hard working father, the slow L train in San Francisco, Arnold Schwarzenegger, shopping at IKEA and the love of his life {sour mash whiskey, of course}. Then the songs breaks your heart like any good country song will. A couple of times his stories caught me off guard and I chortled really loudly, which would have been fine if I was in a bar camouflaged by 100+ chattering drunk people, but I was in a living room with 20 mesmerized people.

Why do I heart A.J.'s music so much? First off, he borderline yodels. I say borderline because he has complete control over his voice the entire time and it's prettier than yodeling. Second is his lyrics. I could go on and on about how great a songwriter he is, but using words to describe words seems redundant, so I give you the original lyrics:

Little Bit Brighter
The moon is rake thin and I know that I'm right when I say it ain't healthy. You're out with him tonight and that sure as hell ain't helping. The city from here is like the end of the year all gaudy and made up; a funeral procession and carnival lights. And oh, this rock keeps spinning round and it's shining just a little bit brighter now that you're out of the picture and out of my plans, but it can't outshine the one he put on your hand. Well the sun comes up and I'm still up and I am drunk and missing you but there ain't nothing I can do but wait for mercy to bring you back to me, kicking and screaming and everything. A bottle that's empty speaks to me nightly but I never understand it. It's speaking in riddles and tongues of an incomprehensible language. That dress that you wear well I swear it ain't fair, it's like a line that I'm crossing. The devil couldn't wear it any better herself.

Mountain Heir {listen to it here }
Let's go down to Grant Street where the fireworks bloom tonight. Reflections on the water look like June bugs hard and bright. Take your heels off, level with me, I'll spin you around. We'll forget for one more night how much I hate this town.

Temporary {listen to it here }
I have been kept from you by the wrinkled hand of fate. But I have felt your lashes soft as kitten thickets. And your breath like mountain laurel on my face. But it's always temporary and I'm off to someone new and they're only there to help me when my arms are full of everything but you.

A.J. Roach's Dogwood Winter album is one that gets better with every listen and soon you'll find yourself contemplating the lyrics, humming the tunes and wondering when that crazy cat is going to wander his way back to Seattle again. It's 13 tracks or pure shit-kicking clever southern charm broken down by a broken down man. Each song is as weathered as the cowboy boots he wears on his feet and each vocal intonation is as detailed and painstakingly placed as the elaborate floral stitching on his snappy cowboy shirt.

But the album is by no means a replacement for the live performance. A little bird tells me that A.J. is going to be back in Seattle at the end of March. Sign up for his mailing list for email updates, or do what I do and… ahem… obsessively check the website numerous times a week.

Special thanks to Guy Browne for hosting the A.J. Roach show. You rock!