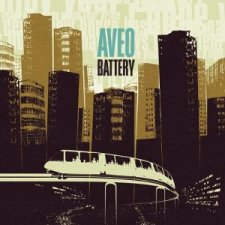 If you ask the average all-knowing Seattle-ite what they think of Aveo, 91.7% of those polled will proclaim their love. My prediction is that with the release of their latest album, Battery their approval rating will hit record numbers… and even previous admirers will be astounded.

You might recall that Aveo’s 2001 release, "Bridge to the Northern Lights" fell victim to frequent comparisons to The Smiths. Since then Aveo lead singer-guitarist William Wilson’s blue-wail-Morrissey-vibrato and the band’s jaunty-jangly (jaungly?) instrumentation has matured into a sound that is distinct enough to call their own. To compare Battery to anything only diminishes the album’s potency, precision and grace. This evolution in addition to the patented Phil Ek production expertise (Pretty Girls Make Graves, Built to Spill, Modest Mouse) makes for a near faultless second release (and their first on the Barsuk label).

Each song tells a perfectly crafted story of self reflection. Wilson’s distinctive vocals accented with sorrowful moans create a musical sparseness that evokes the beauty and comfort of solitude.

Beginning with "Newton and Galileo", the listener is transported to a place where the air is wintry, still, and quiet. Mike Hudson’s bass guitar and Jeff MacIsaac’s drums complement sparse guitars and dark vocal harmonies to create a feeling of yearning and introspection. An undercurrent of the longing for a liberation that is never quite realized. It is a reminder that sometimes resolution is more resignation than release.

The most brilliant moment of the album comes with "Desert and the Great Divorce," a sad rumination on a failed relationship and the penance that follows. The song starts quietly as the anticipatory of tension grows. A subtle guitar line comes in to foreshadow the release of the electric emotion that comes in the last half of the song.

Battery shines lyrically. Most specifically, the cadence found in "Haley":

Think we can leapfrog this month?
Think we can hop scotch this whole damned year?
You’ve got jump-rope and jacks but we might not come back.

The sounds of the words mesh perfectly with the music. The delicate percussion and understated guitar and vocals illustrate a beautiful fragility and restraint. Later the song bursts with intensity and power to become a perfect counterpoint to the carefully crafted opening.

This album leaves me wanting a cold and drizzly Seattle day. It would be a good excuse to hide from the world and lose myself in Aveo. And maybe have some hot cocoa.