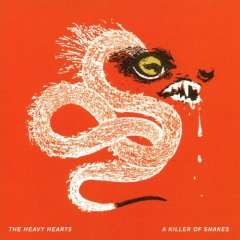 A Killer Of Snakes

The Heavy Hearts attempt paradise by economic means — that is, through the economy of time. Anxiety over time tendrils through all nine of the songs on A Killer Of Snakes, like gold dropped into deprived real rock fans' hands like an embarrassment of riches, um, hooks. Every moment of every super-serious but enjoyably listenable air-puncher like "Spit When You Say My Name" or opener "Attrition" is filled with note-perfect dissonance, android guitar robot-heroics, and melodic drumming.

I got the band's first release, a self-titled CD that earned #18 status on TIG's 2006 Best Northwest releases, and though I had no time to review it that season, I actually played it quite a bit in my own (non-reviewing) time. I regretted not alerting more people to them. The CD featured strong songs, but not nearly as cohesive or focused as this release. Marrieds Denise Maupin and Brian Burnside are part of a team that has roots in Bali Girls, Engine Kid, and the Delusions. A sweet mix job by Johnny Sangster (Briefs, Mudhoney) means they're taking A Killer of Snakes seriously, and it sounds like it.

You've heard some of these chords before — ever wanted to hear the opening riff of The Clash's "Listen" turned into an actual (great) song? There's my pick hit "Revolution" coming up second in the sequence — but they get all re-arranged as if no one ever thought them up before. Whilst the domestic couple as punks thing brings to mind Los Angeles's X, Burnside never sounds like John Doe. Rather, he channels Frank Black in the way that Ian Curtis did for Jim Morrison. More than that, there is a lovely line to Richard Hell & the Voidoids and prime Public Image Limited going on, not just in spastic guitar spurts of the former or grinding two-bass (two basses! I love it!) assault of the latter — but in real, caustic, keeping-time-with-fire spirit. Everything's brittle but it never becomes the same old death disco; instead, iy roils in on itself like you first heard "Come On Pilgrim" or "Blank Generation." I love the early My Dad Is Dead-style sputter of "Spit My Name" and the horror movie run through the woods drumming of "On The Breaks" (last track here, gotta imagine they close shows with it, too).

The Heavy Hearts appropriately sound like they are going to burst from your chest Aliens-style — and as they play, from their own chests, before they can even sing or yelp what they have to say. What most of it is, I'm not sure, but it's usually pretty disappointed, upset, and outright pissed off.