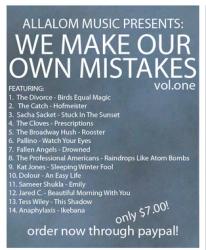 Allalom — We Make Our Own Mistakes, Vol. 1

What makes a good compilation? Unlike mixtapes, compilation albums don't generally have a central theme, and they only offer a taste of each band on the record. I figure the way to judge a compilation is by the number of great songs that are really worth listening to. In the case of We Make Our Own Mistakes: Vol. 1 from Allalom Music, the answer is about half — a really good number for any album.

"Birds Equal Magic" by The Divorce is the perfect opener for the compliation, with its Killers/stellastarr*-esque beginning guitar riff. After singer Shane Berry leaves you feeling down ("Pray if you wanna/there's no way out/you can beg for your mama/but she's not listening"), The Catch picks you back up again with some female-fronted rock in the form of "Hofmeister." Strangely enough, singer Carly Nicklaus sounds almost exactly like the actress who played Mimi in the original cast of Rent, and I had to look them up on MySpace to make sure it wasn't her. But don't be scared; there's no Broadway bravado to be found here.

"Rooster" by The Broadway Hush and "Emily" by Sameer Shukla will satisfy your hankering for the pop side of indie. "Rooster" sounds like what would happen if Mirah got a little happier and sang over a bright electric guitar. It's a feel-good song with a tinge of sadness and nostalgia that can temporarily make you stop worrying about your job, your lack of money, or what you're going to eat for dinner tonight. Sameer Shukla sounds like the long-lost cousin of Rooney or The Turtles, or really any kind of 60's pop band. So it's not surprising that he lists The Beatles and The Beach Boys as two of his musical influences. "Emily" bounces right along with its fuzzy guitars and piano behind "oohs" and "doo-bee-doo"s. Dolour's "An Easy Life" and The Cloves' "Prescriptions" round out the "great songs" half the compilation.

But the compilation is so diverse, you might hate these songs and love some of the other ones that I haven't mentioned. We Make Our Own Mistakes: Vol. 1 features a diverse listing of songs, some of which aren't indie rock at all. There are some soft rock tracks like Sacha Sacket's "Stuck In The Sunset" (try saying that five times fast), standard singer-songwriter fare (Kat Jones, Jared C), and a bonus instrumental track by Anaphylaxis that sounds completely unlike the 13 tracks that came before it. Overall the album has something for everyone and some terrific tracks that will hopefully afford the bands some deserved recognition. Go add them as your friends on Myspace. Then you can say you knew them before everyone else did.