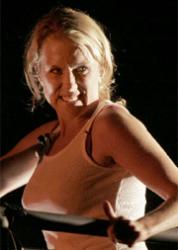 Comic self-portraitist Lauren Weedman came into my life with her short story (or is it a shameful non-fiction confession?) “Diary of a Journal Reader”. It appeared in Dave Eggers’ 2005 Best American Nonrequired Reading, a nifty collection assembled by teens at non-profit San Fran writing lab 826 Valencia — and those kids know from funny, because I haven’t laughed so hard at printed words since David Sedaris’ Naked. One passage in particular, which has to do with a certain part of Lara Flynn Boyle’s anatomy, still gives me the giggles. (Trust me. Read it. You’ll die.)

I’ve since learned that Weedman is a former Daily Show correspondent, creator of several successful one-woman plays, and author of a book of short stories to be published later this year. So it was with big expectations that I entered Seattle University’s new Lee Center for the Arts, the spankin’-new home of formerly Fremont-based Empty Space Theatre, to see Weedman’s latest solo piece, Bust.

I loved the show, but let me stay on the Lee Center for a moment. It’s a fantastic multi-purpose facility with a roomy, well-lighted art-gallery lobby containing an enormous red frame which is actually a doorway that reveals a red-curtained hall… leading to a spare black-box theater. And said theater has good acoustics, modular seating, and surprisingly comfy chairs. Compared to other fringe venues around Capitol Hill, it’s posh. Air-conditioned, even. The possibilities seem endless.

For Bust, the stage remains quite bare, apart from well-planned bits of illumination and CSI-ish tape on the floor. Powerhouse Weedman makes excellent use of this pleasantly non-natty canvas as she trots, climbs, and jumps around it, becoming a slew of 50+ characters (including a klutzily self-assured version of herself) that inhabited a recent chapter of her life. She decided to do volunteer work for a prison advocacy group, you see, selfishly hoping for “a shot at being the prettiest girl in the room,” for a change, in ultra-plastic Los Angeles.

But — and it’s totally OK that you see this coming — our Lauren doesn’t exactly get what she bargained for when those cell doors clink shut. We’re talking hostile training sessions, boorish guards, and a generally unfavorable environment, plus the added bonuses of personal outside crises that arise as she pursues her acting career. Weedman gets the engrossing and very funny story across by marvelously shapeshifting into jail personnel, fellow volunteers, casual acquaintances, and assisted prisoners, alternating between vastly different character accents and physical movements on a dime. Right before your eyes, with what seems to be slightness and subtlety, she becomes everything from a high-power media whore to a low-status ne’er-do-well. It’s brilliant to behold.

I could gush at further length about Weedman, but a good deal of credit goes to Empty Space Artistic Director Allison Narver, whose keen direction here helps convey the mishmashed tale with just the right amount of theatrical disbelief-suspension. Mark Nichols’ and Jessica Trundy’s sound and lighting designs, respectively, efficiently imbue this new empty space with setting and tone, from the fierce metal clangs of the LA County Jail to the ridiculous faux-euphoria of a soft drink commercial shoot.

It all makes Bust by turns reflective, hilarious, and compassionate. And a worthy addition to the company’s daring and unconventional canon.