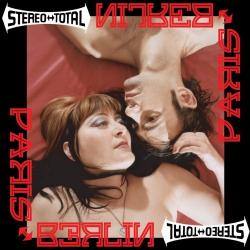 It is hard not to enjoy Stereo Total’s Paris-Berlin. It has all the fun you might expect from the German/French band. Its odd mixing and matching of sounds, languages and themes make it a beautiful postmodern pastiche of modern music, riding the crest of the neo-new wave right on into shore, taking its blend punk rock ideals and dance rhythms well inland.

Rarely do you find the French and German getting along as they do in Stereo Total. The duo is half-French (Françoise Cactus) and half-German (Brezel Göring, who kind of looks like a creepy young Fox Mulder) and based in Berlin, but as the title of their new album implies, there is a direct line between Paris and Berlin for the band. Nothing on the album should really be taken seriously it seems; instead you should sit back and enjoy a piece of multicultural wonderment. The opening two tracks (“Miss Rebellion des Hormones” and “Ich Bin Der Stricherjunge”) are even in different languages, one each in French and German and both are cute, post-new-wave treats, like a foreign Art Brut more interested in disco than punk. Stereo Total seems to take bits and pieces from everywhere to make their sound as “Plastic” sounds more like a lo-fi modern rock track by the likes of Junior Varsity (and it is in English, for those of you keeping track). Like most songs on Paris-Berlin, “Plastic” likes to point out the ridiculousness of modern culture (specifically here, plastic surgery), finding Françoise singing ”I want to be plastic too/less like me and more like you”.

I think if there is one word that could some up Stereo Total, it might have to be “cute”. The Casio keyboard samba rhythm of “Komplex Mit Dem Sex” combined with the adorable duet singing is just like fluffy kittens on parade. Even on more straightforward songs like “Lolita Fantome” there is just something cuddly about the sounds the duo produces, kind of like an anarchistic Mates of State. Of course, it might help that I have no idea what they are singing, but hey, ignorance is bliss. And things can get downright bizarre, like on the sort modern electro-country of “Plus Minus Null” that comes across as Atari Teenage Riot Lite or “Relax Baby Be Cool”, where disco meets 50’s rock on the set of a Jean Luc Godard film.

Stereo Total tackles seductive dancerock with “Meir Licht,” where the duo sounds like you wish Block Party or Franz Ferdinand might sound. “Ta Voix la Telephone” is just a beautiful, fun French pop number with its tongue planted firmly in cheek, while “Patty Hearst” is a pop-punk ode to the Manson disciple. The band wraps up Paris-Berlin with their take on astropop ala Yo La Tengo with “Moderne Musik,” although they speed up the tempo a little more than their American influence.

Stereo Total is by no means a band that strives to make perfect music that will leave the true music nerds in awe. Instead, they endeavor to disassemble popular culture and music and reassemble for their own purposes. That is exactly what you get in Paris-Berlin: a collage of rock from the 50’s through the 21st century, dissected, digested and regurgitated by Stereo Total into a dance album that is at the same time refreshing and reflecting.