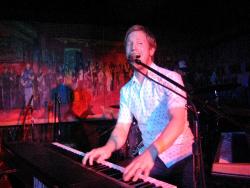 My first Amateur Lovers show in a decade

When I first moved to Seattle and started going to shows back in 1996, I had two local musical crushes: Goodness (and really, who didn't have a crush on Goodness back then?), and Amateur Lovers, a four-piece pop band I must have seen a dozen times over the course of my first year in town. I fell for the band's 70's influence power-pop style, their stellar songwriting, witty lyrics about young love, ripping Queen-influenced guitar solos, and gracious keyboard melodies.

Their debut record Virgin White Lies is still a favorite, though the band went on hiatus back in 1997 or so and hadn't been heard of much since… until Saturday night's International Pop Overthrow show, when the band reunited to headline the eight-band bill.

It was a complete time-warp in a way, watching the band and singing along with all my favorite tunes ("Consolation Prize," "Rubix Cube," "My Grand Debut," for those of you keeping track at home). They also played a couple of "new" songs during the set ("They're new, as in, only eight years old," joked singer Sean Boots), and they certainly were new to me, as they were songs that had been intended for a second record that never came.

A lot has changed in the world in the past decade…

Now I can be a sucker for nostalgia as much as the next girl, but my enjoyment of the show wasn't based on sentimentality for the past; it was completely current. My imaginary ears, having heard hundreds — maybe thousands — of new bands in the past decade, would still pull Amateur Lovers from the stack and put it in high iPod rotation if it arrived today. For me, their spot on melodies and pop sensibilities are timeless.

And for a band that hasn't played out in so long, they sounded tight as can be. Sean Boots and Scott Clampett continue to share vocal duties (if memory serves, they each sing the songs they write), which brought a nice diversity to the set.

Clampett plays a mean lead guitar, his Gibson stylistically placing him somewhere between Brian May and Neal Schon, two of my favorite all-time guitar players. I so admire a dude (or dudette) who can play great guitar melody but who still isn't afraid to shred a bit on the solos.

But for me, what has always made the band stand out is Boots' keyboard prowess. Armed with two keyboards, he carried much of the melodies with his deft playing, his fingers flying down the keys with a joy that clearly emanated out to the crowd.

Speaking of the crowd… that's one thing that definitely has changed since the old days at the Brick Street. Who were all of you people?!? Most Amateur Lovers show I attended were, um, intimate gatherings, to say the least. They definitely had a core group of fans in their day, but never did I see them play to a packed, screaming, superfan-filled room as they did on Saturday.

Up in the front, folks were singing along, yelling out requests for their favorite songs, calling "BOOTS!!!!!" to the frontman, and generally reveling in the performance. It was exciting, and the band was clearly honored and touched by the attention. They even came out and played a two-song encore (and seriously, this was no phony encore; the crowd would not let them stop playing!). The encore was a special treat: they ended the set with my favorite song of theirs, "Consolation Prize" (a tune that contains the funniest metaphors for masturbation I've ever heard), and also played one brand new song!

Does this mean the Amateur Lovers' reunion show might spawn repeat performances? Perhaps a new recording? I (and the other superfans) can only hope.