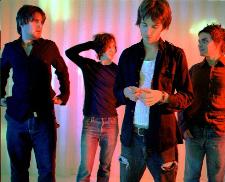 I just love to go to a show and find that the bands on the bill compliment each other. The recent Ambulance LTD show at the Chop was a perfect example of line-up synchronicity.

The evening kicked off with a set of dreamily constructed music from Hypatia Lake. Beginning with ambient sounding keys and then layering piano, fuzzy guitars with shoegaze-y synthesizers, Lance Watkins tenderly sang the lyric, "do it my way or take the highway." Hypatia Lake's set was one part emotive rock concerto — as they have mastered the art of song transition — and one part spacey art noise. They can take the crowd from an airy melody into a thick, heavy rhythm without stumbling, and each song lingeringly transforms into the next. Even the stage set was accented with coursing streams of carnival-like lights, heightening the moody atmosphere. By what I think was the third song, a crowd was huddled, their heads gently nodding up and down to the music. Hypatia Lake opened the night with a bewitchingly continuous melánge of sound.

Next up were Seattle's the Turn Ons. Their set began tempered, measured and moody, then worked into a heavy and blazing frenzy at its end. Beginning with the delicate and lovely "The Low End," Travis DeVries' falsetto boyish, almost fragile voice, worked the crowd like sonic kisses on the ears. Meanwhile, guitarists Erik Blood and Corey Gutch played off each other's dense and distorted instrumentation for a rich, dreamy soundscape.

I especially dug the very stoic presence of Sharon Oshima. After their show, Erik told me he's afraid of her. (He's pretty sure she could kick his ass, if she wanted to.) Regardless of her ass-kicking prowess, she provided an anchor in both instrumentation and presence. Drummer Will Hallauer looked quite peaceful despite the raucous noises he was making on his kit. Closing the set with the sexy and raging "PS I Love You," The Turn Ons put on an amazing show.

And of course, New York hot-band-of-the-summer Ambulance LTD headlined the show. I was excited to see them live after reviewing their debut record upon it's release in March. It's a fine CD to add to your summer music catalog for many reasons, but mostly because of its diversity. Not one song sounds like another, and they blend a myriad of influences: 70s pop rock, jazz, and early 90s indie rock. So, I don't want to hear any complaining about everything sounds the same these days, because Ambulance LTD is a fine example of what's good and original. And they're super cute to boot. Speaking of which…

The band took the stage without much fanfare: no fancy lights, no signs, no smoke machines. Not surprising, considering lead singer and chief songwriter Marcus Congleton's hometown is the no nonsense Eugene, Oregon. It also made sense that he was wearing a paper thin Grateful Dead t-shirt with a huge hole in the shoulder. Who knew a hole-y Grateful Dead shirt could look so hot, while Marcus shuffled around the stage doing his little dance behind his acoustic guitar…?

Beginning with the atmospheric "Stay Where You Are," the band looked a little road weary. Despite this, the set was brilliantly engaging. Some highlights: for the mildly country "Anecdote," Marcus strapped on his banjo that for a moment reminded me of Robyn Hitchcock. They closed the set with instrumental "Yoga Sex Union," a song that builds into a frenzied, almost anthemic finish. The band returned for a clever encore of "Stay Tuned."

As I said, the blending of atmosphere, layered guitars, and good lookin' fellas made for a fine triple bill. And who doesn't walk away from a night like that with a smile?