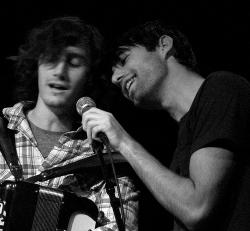 A mid-week orchestral pop night with The Builders and the Butchers, See Me River, and Hey Marseilles at Neumos

I was originally attracted to this show because The Butchers & The Builders are opening for Amanda Palmer's Seattle tour-stop in December, and I'm an avid follower of her art. Say what you want about her solo work (which, versus her Dresden Dolls work, has a very different flavor), Amanda has a good nose for talented bands. This is how I discovered the Australian band called The Red Paintings, who have a psychedelic Alice in Wonderland take-off song that's a lucid-dreaming monologue called "Streets Fell Into My Window."

So, knowing that The Butchers & The Builders had Amanda's stamp of approval, I arrived at Neumo's anticipating a really good night. The bands didn't disappoint!

See Me River opened with a dark country, vigilante-esque vibe. The band focused on strong guitar chords and fills in-between spaces in their songs with a glockenspiel and clapping. A song you'll want to hear is "Wake Up Are You Wasted," and not just because they gave it a good title; fans of Jason Webley's latest album will find something to fall in love with. 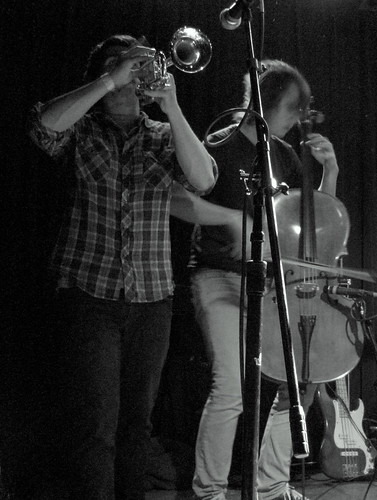 Before Hey Marseilles even made an appearance, people who had been at their CD release party in August were getting that glazed, fanatical look in their eyes when they described how amazing they expected the set to be. When the band hit the stage, they sounded like a Northwest hybrid of The Decemberists and Kay Kay & His Weathered Underground: basically beautiful. Eight hot musicians on stage with accordion, cello, viola, drums, trumpet and guitar? Yes please.

The audience was at its largest for this part of the show–in part because of the draw that Hey Marseilles has on the local music scene, but also because it was a Wednesday night and the 9-5 folk are usually ready to leave around 11:30. Later outside, one of the band members (I think Matt Bishop) described their music as "folkestra," a hybrid of folk and the orchestra pop that's been popping out of the woodwork these days.

Of the people who lasted until The Builders and the Butchers started playing, the folks at the front were handed tambourines to dance along to their music with; one was in the shape of a panda.

Silly, right? But a band who can sing in acappellic unison, and make the audience spontaneously clap alongside them in rhythym, is allowed silly panda-shaped tambourines. Especially considering the way their music smokes with fire, banjos & brimstone: imagine a dark version of the O Brother Where Art Thou soundtrack, and you've pinned down a lot of the shouted vocals/tinny sound of old time radio that The Builders and the Butchers utilizes. Plus, they have two drummers that beat a bass drum and a marching drum side-by-side; visually, it looks like they're sending drum signals… to your heart.

If you've been thinking that there's a serious lack of mob-themed music lately, then look no further. The Builders and the Butchers played a song called "Bottom of the Lake" about a guy who took a trip with a pair of concrete shoes, and how much simpler life is now that he's swimming with the fishes: "it's so much better on my mind not to count my days."

Continuing in the orchestral pop theme of the evening, this song wouldn't have been out of place on The Decemberists' Crane Wife album. But there's also a strong water theme that runs through most this band's music, spanning lakes and rivers with raindrops intermingling–really, The Builders and the Butchers play the kind of cheerfully-dispirited music that's best heard on a dark and stormy night, while you're cozy inside and can appreciate the darkness with your lights on. For that genre, 'tis totally the season. 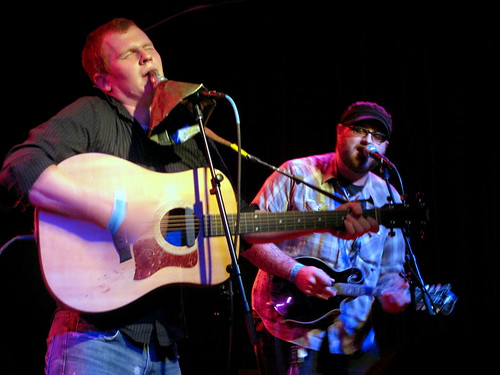 Near the end of the set, the lead singer broke out a big black megaphone (the type that a cheerleader would use at a funeral. That is, if megaphones ever made an appearance at a funeral) and started shouting out lyrics for the song "The Night," I think part one. "Well tonight/It comes coming in/The night-time, it comes crawling in….I'm gonna take your heart and put it in my pocket/when the night-time, it comes crawling in" and the audience yelled back in time with the rest of the band. Afterwards the night-time did, actually, come crawling in and I ducked out into our dark and wet city with a lightened breast–in the end, the bands really had pocketed my heart.