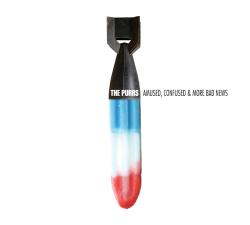 Hailing from Seattle, The Purrs create a fascinating concoction of psychedelic pop. The band is an amalgam of their influences, which range from Echo and the Bunnymen to Television to Oasis. Amused, Confused and More Bad News is a terrific blend of darkness and light. The album is their fourth full-length to date and it is also the most mature, fully realized disc that they have pressed thus far.

Most of the tracks are catchy, mid-tempo compositions. “Fear of Flying” is the type that resonates in the listeners’ head long after it comes to a close. The rhythm section recalls The Church or perhaps Love and Rockets and the sweltering lead guitar adds just enough trippiness to override the basic pop structure.

“Baby I Want You Back” is also unrelentingly infectious. Sonically, it is a bit of Rain Parade meets Neil Young. The song starts out great and ends even better with a change in pace and loads of reverb and echo drenched guitar along with an intoxicating, walking bass line. “The Outpost” is a melancholy standout track that also manages to be rather catchy. Singer Jima’s singing and lyrics puncture the driving, siren-like song. He sounds half inebriated and half lucid in his performance, but also comes across remarkably charismatically and it fits the melody quite well.

At one point, the new album was almost named after one of its songs, “A Century of Rain.” It is a shame that that title was rejected in favor of the winner as it is a much more effective way of describing the musical elements contained within the record. The Purrs are not to be missed live. They have an effortless manner of recreating their songs onstage.