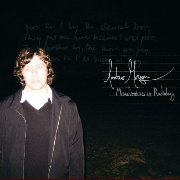 Elliott Smith fans take note: while nobody could ever replace Elliott, Andrew Morgan will surely bend your Smith-missing ears in a positive direction. As Morgan’s friend and mentor, Elliott obviously had his influence, but Morgan takes Smith’s sweet melancholy and adds the cinematic effect of orch-pop to create an album that’s emotional, improvisational, and ambitious.

Morgan’s musical sound incorporates so many instruments, you wonder if there were any that weren’t played on this album. In addition to the customary piano/guitar/percussion mix found in most bands, Morgan’s album credits musicians on cello, viola, French horn, harp, tympani (I had to grab my dictionary for that one), sleigh bells of all things, and many more. This cornucopia of instrumentation results in a sometimes playful sound similar to The Shins.

The title song on the album is the catchiest of the bunch. If there were a single to be had on here, this one would probably be it. Misadventures… doesn’t really scream “radio hits”, however. Although an incredibly accomplished and polished album, it will probably carry the same curse that Smith shouldered of being a bit too woeful and downbeat to propel him into commercial fame. Songs like “Joanne, You’ll Be Happy Soon” and “Plight of an Exile” especially carry that whisper of Smith, the latter sporting lyrics like "…a life in fullest bloom, that from me, was wrenched so soon…" That being said, having a radio hit doesn’t exactly speak to being a talented musician. The dramatic yet delicate melodies Morgan creates aren’t often heard on the airwaves… which is why they're all the more appreciated. If Morgan is looking to make moving, emotive music for a loyal fan base, he will no doubt succeed.

Misadventures in Radiology, released on April 5 on Sonic Boom Recording, was embraced in the UK back in 2004, before it made its mark in the US. This seems fitting, as Morgan himself is a self-confessed Beatles and Brit Pop mega-fan. UNCUT magazine even named this release on its esteemed Best New Albums of 2004 list. Morgan self-produced the album, and it was re-mastered for the US by Doug Van Sloun (Bright Eyes, The Faint). With talent like this behind him, and another album coming soon this year, Morgan should be ready for greatness.