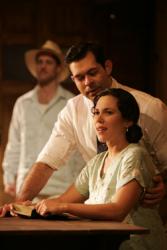 Cigar factories of the late 19th and early 20th centuries often utilized the services of a "lector," a person hired and paid for by the workers themselves to read aloud from newspapers and novels during the workday. Listeners were treated to entertainment and education — often with a leftist slant — from news, commentary, and classic literature. When many Cuban cigar plants relocated to factories in the U.S. by the end of the 1800s, the practice of employing a lector traveled with them. It wasn't uncommon for factory workers — many of whom were illiterate, and all of whom were struggling to preserve their tradition in the face of impending modernity — to be able to quote from Shakespeare or Cervantes, or to be more politically aware than their American counterparts.

Excellent Anna in the Tropics is set in a cigar factory in 1929 Ybor City, Florida (a Cuban district of Tampa), and the newly-hired lector (Bryant Mason) is just beginning to read Leo Tolstoy's novel Anna Karenina. Its major theme — passionate love and its potentially dire consequences — begins to echo in the lives of the workers: factory patriarch and matriarch Santiago and Ofelia (John Herrera and Maria Elena Ramirez), their elder daughter and her husband (Romi Dias and heroic Paolo Andino), and younger daughter Marela (Tanya Perez), among others.

Playwright Nilo Cruz ingeniously interweaves Tolstoy's classic plot with his own shimmering and bittersweet tale. I wouldn't dream of depriving you of the story's joys, but I will report that there's a spicy love triangle, a shocking murder, some suggestive cigar-smoking, a little nudity, and a lot of laughter. The sensuous yarn's twists are many; the surprises, gasp-inducing. You've never seen anything quite like it.

Overall the cast is first-rate. Extra love to fabulous Ramirez (last at the Rep in Living Out), and to Perez, who brings such a gleeful candor to the spunky Marela that the character's eventual loss of innocence leads to an immense silence that's absolutely crushing.

Hugh Landwehr's revolving, raw-planked set of the factory and surrounding locales is a wonder to behold; the actors weave among it effortlessly as their characters move through their lives and times (stopping occasionally to discuss the day's allotment of Anna Karenina as if it were last night's episode of must-see TV). This coupled with the fantastic employment of Cuban tunes provide a profound and genuine sense of place.

Anna in the Tropics is a masterful and fiercely original piece of work that I just can't praise enough. A Florida production was awarded the 2003 Pulitzer Prize in Drama — a first for a Latino playwright — and this mounting is its Northwest debut. (It's also Sharon Ott's final directing job as artistic head of the Rep, and what a fantastic note to go out on.)

As you might expect, the biggest star here is Nilo Cruz. His mysteriously dazzling dramas are just beginning to acquire a following in the United States (even despite the Pulitzer), and he is fast becoming one of my favorite contemporary playwrights: Anna and The Beauty of the Father (performed last May at the Rep's Leo K.) have been the hands-down highlights of my theatre year. Do yourself a favor and take an evening to escape into Cruz's sumptuous world. It just doesn't get much better than this in Seattle.

Waxwings just happens to be playing in the same building as Anna in the Tropics, and as I entered the theatre for an opening-weekend performance I felt a none-too-slight twang of jealousy at the Anna crowd's great fortune.

But little did I know that I was in for an altogether different treat. You see, I've been pretty down on our city lately. I'm through with the flakes. Put out with the lily-white Mayberry-with-skyscrapers attitudes. Frustrated with the herds of people who drink mediocre (but consistently so!) Starbucks® beverages when there's better to be had and they know it. Weary of the general laid-back willfully-naïve passive-aggressive politically-correct blandness that locals so proudly display.

(And I'm just talking about Capitol Hill. Don't get me started on somewhere like Wallingford or Ballard or — sweet Jesus — Pioneer Square.)

Well, thank goodness for the catharsis that awaited me in Waxwings, an observant and at times refreshingly irreverent sampling of Seattle life on the cusp of the 21st century. The latest from beloved Book-It was adapted from local writer Jonathan Raban's 2003 novel of the same name, and is a keen and entertaining mélange of satire and sorrow.

It's essentially the story of two Seattle immigrants with wildly different life experiences: Hungarian-born British author Tom Janeway (Terry Edward Moore, doing his best Frasier Crane impersonation) and illegal Chinese alien Chick (infectiously energetic Sam Lai) meet while going about pursuing their own versions of the American dream. Much of the first half takes place before their disparate lives have intersected; this with the offbeat music choices and silhouette-friendly set design give the play a cool experimental quality.

A contemporary Seattle story is a bit of a departure for Book-It, but I'm glad to report that the company hasn't strayed from the compelling and surprising literature it consistently brings to our stages. Here, one of the major characters winds up in the wrong place at the wrong time and is subsequently accused of murder, and the other works tirelessly to increase his earthly fortune. Can you guess which does which?

Mary Macala skillfully directs Julie Beckman's adaptation of the insightful novel. They've given me just what I needed.

Based on a theme determined by audience suggestion, SNP shoots, scores, edits, and projects an improvised movie before your very eyes. The insta-flick that resulted from a recent Friday night performance was named Skullcap, and involved three separate vignettes that merged precariously (but rather ingeniously) at the end:

< li>A compulsive liar (funny SNP regular Joel Dale) meets an old friend on a street corner and claims to have just returned from a long, hetero-sex-filled Israel trip. Later, at Caffe Vita, the friend makes a bet that Joel can't get a certain girl into bed before the night is over; Joel spends his dinner-and-bus-fare money to bribe her.

This was my favorite SNP performance to date: it topped Sleep (from last year's Fringe Fest run), Tide Me a Prince (from the February show I attended), and even the wonderful Googly Eyes (from this past April). The addition of live stage band Almond Joy this time 'round is an ingenious enhancement, and, as always, the apprehension/anticipation of never knowing what you're gonna get is what makes Neutrino such a hoot. I'm happy to report that SNP just keeps getting better.