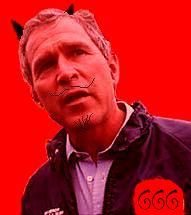 Fuck our so-called free press. I mean it. Fuck them. Fuck them for their presumed authenticity. Fuck them for not fulfilling their proper role of investigating and challenging our government, and educating our citizens in an unbiased fashion. Fuck them.

{except for Salon.com, which featured this fantastic article today about the whole elusive and incoherent Dred Scott comment Bush rambled on about during the second debate. He was actually passing along covert "I will reverse Roe vs. Wade" messages to other Conservative Christians. Seriously. Read it, but make sure you come back to MY article, as I have something very important to tell you, and actions for you to take.}

Back now? Good. Here's the deal.

Sinclair Broadcasting Group just announced that they plan to run an anti-Kerry film called, "Stolen Honor: Wounds That Never Heal" just prior of the election. According to CBS5.com, the film, "features former prisoners of war accusing Kerry, a decorated veteran who took up the anti-war cause upon returning from Vietnam, of prolonging the war and worsening their plight." The Sinclair Broadcasting Group is yet another media conglomerate like Clear Channel that has flourished during the Bush administration, and currently owns or programs content for stations in 62 markets, including many swing states. Sinclair is ordering each of its affliate stations to pre-empt local programming in favor of this film. Just before the presidential elections.

So you might ask — as the intelligent, fair and balanced imaginary readers that you are — does Sinclair plan to provide equal time to Kerry by running an hour-long documentary about how both Bush and Cheney completely dodged the Vietnam war altogether? Nope. They are running a unilateral, completely partisan attack on Kerry, the moment before the most hotly-contested and important Presidential election of our lifetimes.

Know what I say to that? Fuck Sinclair Broadcasting for attempting to manipulate the election under the guise of presenting real news.

This isn't the first time the mainstream media's overt conservative leanings have reared their ugly partisan heads. Back in April, Sinclair pre-empted an episode of Nightline from their stations because Ted Koppel read aloud the names of the 500 (at that time) US military personnel who had lost their lives in Iraq, claiming the program was, "motivated by a political agenda designed to undermine the efforts of the United States in Iraq."MoveOn.org was denied the right to run a 30 second ad during the Superbowl, on the grounds that it was "too political" in an election year. These same networks all refused to run advertisements for Michael Moore's "Fahrenheit 9/11" DVD, citing, "the closeness of the release to the election" as justification.

Are they fucking kidding? These so-called news networks won't run simple 30 second advertisements with left-leanings, but they will force compulsory conservative programming across their vast nationwide network in the last days leading up to the election??? Fuck them!

Oh, and to make this even nastier: Looks like our friends at Sinclair have contributed thousands of dollars to Republican candidates this year, most notably over $150k to re-elect our dear dumb president. Guess what I have to say to that? Fuck so-called news organizations with strong partisan leanings that are supposed to provide fair news coverage to the fine unsuspecting folks in our country. Say with with me, imaginary friends — fuck them!

Fuck. We are so fucked.

Does this hypocrisy violate everything you know about the so-called free press in this country? Yea, me too.

Ready to act? Fuck yeah! Here's what you can do…

Fuck. Aren't you tired of having to distrust and fight your government? This isn't advocacy work any more — it's self defense! Keep fighting the good fight, my imaginary friends. No matter what happens on November 2nd, we have a lot of work to do to win our country back…

{PS ~ I wrote this on 11 October 2004. Already I have an update! Yesterday former FCC Chairman Reed Hundt sent the following message to executives at Sinclair Broadcasting Group…}

Dear sirs:
I'm told you were involved in a decision to order Sinclair stations to carry anti-Kerry propaganda. If my information is false, please forgive this intrusion. While I do not believe you should be required to carry pro-Kerry content, except of course for an even-handed sale of your advertising time to both campaigns, I do wish to register my objection and concern if in fact you have obliged your stations to carry anti-Kerry propaganda.

I assure you that if you were carrying anti-Bush propaganda I would be equally concerned.

The problem is this: How can it be part of a broadcaster's public interest obligation to aspire to alter the perceptions of the audience about a presidential candidate by showing biased content that in no way reflects either breaking news or even-handed treatment of the issues? Why should a broadcaster keep its licenses if it behaves in this manner? I hope you will reconsider your edict — unless, of course, I am misinformed, in which case I do hope you forgive this message.

{Goodness, TIG hasn't seen so many swear words since igLiz interviewed mclusky back in 2002. igDana wishes to send special thanks to the Ladies Who Lunch for help with this article and inspiration during these trying pre-election days.}