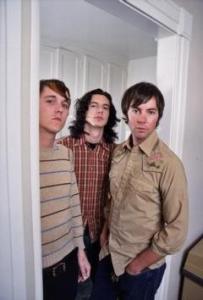 These Arms Are Snakes

A few weeks back I was sent a press packet from the publicist of These Arms Are Snakes, who may be the best live band in Seattle right now. It was pretty standard-filled with info about their new recording, past reviews, articles, and interviews.

Initially nothing struck me as something to think about. However, there was an article from the CMJ that I found a bit interesting. It cited people referring to TAAS as "shames," "charlatans," "assholes," and "sellouts." It mixed these labels of disdain with high praise making the point that this is a band that is doing something right-there is no middle ground here! Nonetheless I found it interesting. The memories flooded in.

Thursday September 16, I had a chance to reflect upon these ideas and others with Ryan from These Arms Are Snakes. The first thing I had to ask was what question or questions do you hate. My sense of time is suspect but I'm sure there was a pause before he answered.

"I hate when people ask about our name. I mean I'm sure they're nice people, but you can tell that their editor simply told them to write the interview and they know nothing about the band." I wondered if he ever tried to make a sport of it, as they say across the pond. "Yeah, you know that Otis Reading song, 'These loving arms of mine' or something like that, I've always wanted to incorporate that song and some snakes into his fatal plane crash. There has to be some way to put that together."

If you've seen TAAS live or been privy to a listen of their new recording you'd understand my wondering who taught Ryan to wrestle with razors and laser beams. The guitar playing is intense and complements the driving rhythm section. The 2003 release of This is Meant to Hurt You may make my enthusiasm seem be a bit overboard. It is true that the aforementioned recording was simply alright but did no justice to the live show or the potential of the band. They more than made up for that with Oxeneers or The Lion Sleeps When Its Antelope Go Home. This recording is bigger, tighter, and much more difficult to remove from your stereo. How were they able to achieve this great leap forward without all the carnage that Chairman Mao faced?

"Well, when Erin came onboard (drums)-he really cracked the whip. We worked really hard over the past year. When the record was finally done, it was a while before I could listen to it, and when I did, I was really happy with what we had done. It's nice because we all have gone in different directions in terms of what we listen to but have not lost this common vision of what it is we're trying to create. It makes this a lot of fun."

This new recording is moving the band further away from the hardcore sound and more and more into the post-hardcore or alt-something direction. It's rich and textured. They borrow beats, sounds and changes that hint at everything from hip-hop to shoegazer to goth and even noise or space rock. Oxeneers never wears you down or rests on a crowd-pleasing grove. This is a complex piece of music that draws you in, and the drivers always know when to hold on or let go.

This can create problems. People seem to like what is familiar. These guys won't be the first to wrestle with the question "Do we do what is getting people into us or do we continue to grow?"

"It's hard to think about music labels. We'd like to think we're creating art not a product. It's bittersweet. You want to have people like or appreciate what you're doing, but the day we appeal to frat boys would be the day I call it quits."

"Has this made it difficult to play on hardcore bills? We always want to keep on moving. It is tough. We've played with other bands that attract more of a traditional hardcore-follow company policy-types of crowds and the responses have made for some bad shows. There are all these jock kids at these types of shows and they don't ever seem to like it or get it. They are calling Steve a fag or a homo-this has nothing to do with anything. It should be all about music but it's not. It doesn't have to be like that though. I think mindset and vision is more important than genre or style. I mean, who would of thought of Isis and Mogwai as a good combo but their tour together was intense (True that)! We would love to play with DŠlek. It's more important to be with bands that will draw people who are more open. Maybe thinkers."

"It sounds a bit pretentious and people may think about bands like the 90 Day Men and say, "Hey they're snobs" but that's better than playing to a bunch of jocks who want to start fights with people. When you get these big mosh-pit anthems going they tend to pander to the lowest common denominator. I know it's a bit selfish and it's noble to be a force of change but I don't want to play for those people-it's just not a cross I want to bear."