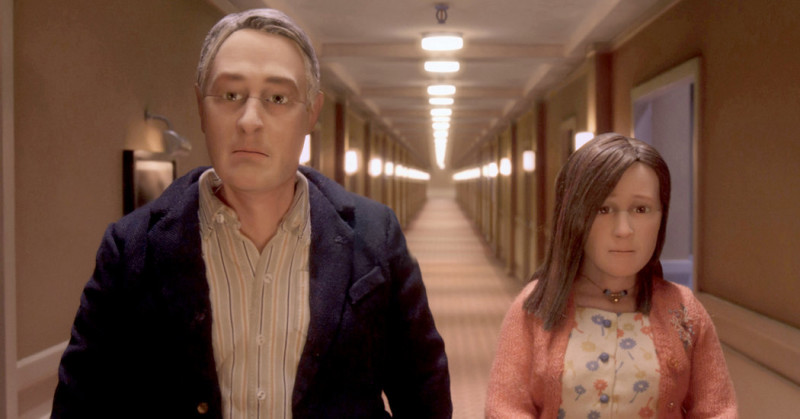 Welcome once again to the twisted fever dream that is writer Charlie Kaufman’s brain, this time in painstakingly beautiful stop motion puppet form.

Even if you’re used to Kaufman’s quirks, Anomalisa will still be unlike anything you’ve ever seen before. Michael Stone (voiced by David Thewlis) is a customer service guru traveling the conference circuit to promote his book, “How May I Help You Help Them?” (I, uh, snorted, just typing that)

Attending a conference in Cincinnati, Michael descends quickly into despair and martinis as the crippling loneliness and mundanities of his life overwhelm him … until he notices something that stands out from the noise: the crystal clear voice of Lisa Hesselman (voiced by Jennifer Jason Leigh).

Lisa is a sales rep from a baked goods company who’s come to see Michael’s lecture along with her friend. She’s also awkward, self-deprecating, and unsure what to do with all the attention Michael seems to be lavishing on her. Michael sees Lisa as his savior; the one person he’s been waiting for his whole life that will make everything better.

And just when you think you know where this film is headed, you don’t. Michael is someone who needs the extraordinary to happen to him; Lisa is someone who doesn’t think ANYTHING extraordinary will ever happen to her. Thus, how the experience of meeting each other affects them is wholly different … and like all Kauffman films, you’ll leave the theater turning what that experience actually is over and over and over in your mind.

But what about those puppets? I already mentioned the “painstakingly beautiful’ part. As for being able to relate to things made of felt and wire; at first you might be distracted by the non-flesh details, but after awhile Michael and Lisa become so human you won’t even notice. Also, honestly, the sex scene between them is one of the most realistic scenes I’ve seen on film.

One more thing: All five of Tim League’s reasons for seeing this are correct, especially the one about Tom Noonan.