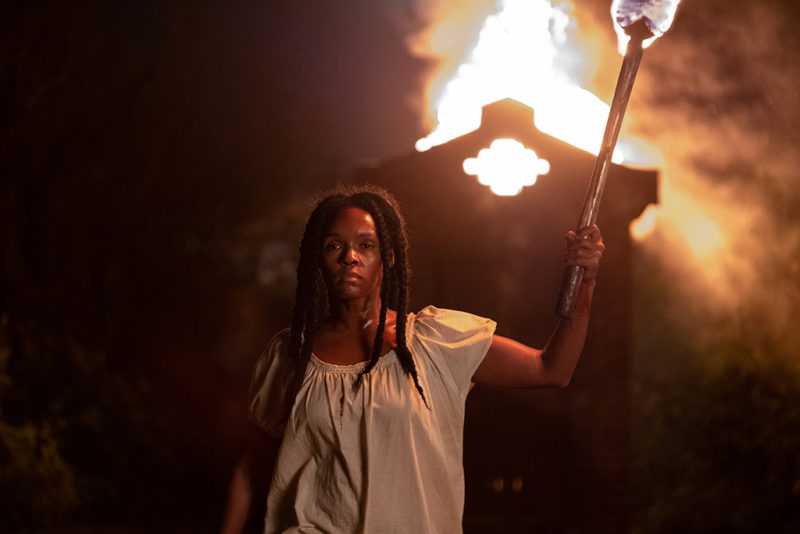 I’m not sure how (or why) they did it, but writers and directors Gerard Bush and Christopher Renz have somehow created a film that’s both impossible to talk about without spoiling, and super easy to figure out while you’re watching the film.

Later on, we meet Eli (Tongayi Chirisa), a slave who distracts Jasper by “talking back” to help Eden assist new arrival Julia (Kiersey Clemons) after one of Julia’s beatings results in her not being able to stand and pick cotton. Every time they’re able to talk alone, Eli and Julia encourage Eden to try escaping again — but Eden isn’t willing to take the chance because it may cause the death of more of her friends.

The second half of the film pushes us into present day, and introduces Veronica Henley (played again by Monáe). Veronica is a successful activist and author, lives in a gorgeous house with her husband and daughter, and gives old white dudes hell on political news shows. And that’s about all we know of her, except that she also used to ride horses competitively, given the photos we breeze by as the camera tours her show-home.

After an uncomfortable video chat with a very obviously racist Southern white woman named Elizabeth (Jena Malone), Veronica heads off to another city to promote her book (I guess book tours involve TED-like presentations now? Or maybe it’s a conference? I’m not clear on what’s up with this “event”), Veronica meets up with her two, also successful, BFFS: Dawn (Gabourey Sidibe) and Sarah (Lily Cowles). The three head to dinner and of course begin talking about what all successful women talk about: hooking up with hot dudes and dick pics.

ANYWAY. Eventually the two stories converge, and I won’t give anything away about how — but I will say that it’s incredibly easy to figure it out because this film isn’t interested in subtleties of any kind (except when it comes to character development, apparently).

Listen, I understand the “message” that ANTEBELLUM is trying to deliver: there are still a lot of incredibly racist and dangerous people in the world, y’all — but it is one big mess of a movie. Malone campy performance and the cardboard caricatures of the other villains don’t mesh with the gravity of what happens in the slavery setting, and the only reason I found myself caring at all about Eden or Veronica was soley due to Monáe’s fantastic emoting. And the only thing the “twist” they’re promoting elicited from me was an eye roll.

Does it look beautiful? Yes. The cinematography is amazing. Is watching Monáe on screen compelling? Yes. She’s great – truly the only great thing in this film. Do we need to be hit over the head with confusing messaging that plays more like terribly done exploitation? No. I don’t think so. My advice to you is to avoid this one.

But if you feel you must; ANTEBELLUM is now available to watch on demand on most streaming platforms.