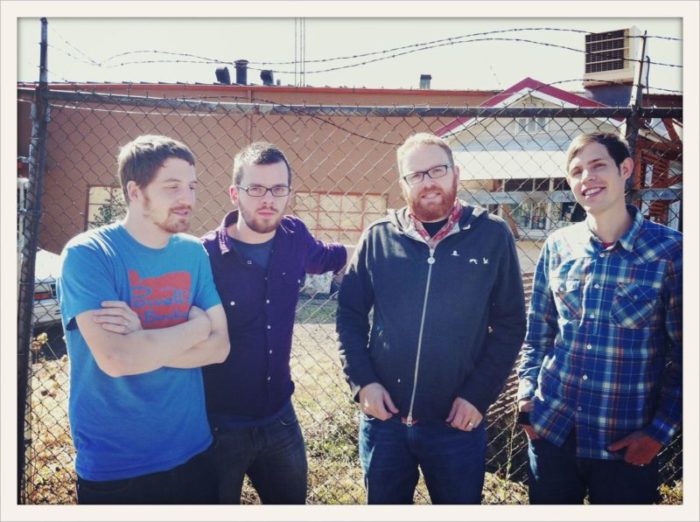 In May of 2020 (which is both yesterday and a long time ago), our BOAT friends released their latest album – Tread Lightly.

The new album is a coming of middle age confessional (i.e., they are speaking my language). They hold together their missives with the unexpected and catchy refrains for which BOAT is imaginarily famous (and why we love this band so so much). The songs’ affable lyrics paired with uninhibited melodies make me feel as emotionally satiated as watching a pink sky sunset while surrounded by all my favorite people.

It’s quite the triumphant return after a 7-year hiatus that was filled with a mixture of fun and scary life stuff. While the band members were quiet on the BOAT front, they still kept us in new songs via their other musical endeavors. D. Crane (vocals / guitar) released three records with Unlikely Friends (to much imaginary acclaim). J. Long (drums, keyboards, etc.) focused on his work at KEXP and recording bands. J. Goodman (bass, guitar, keyboards) focused on his band [b r a c k e t s].

There are hints of lessons learned from their other musical projects and personal playlists. There are nods to Supergrass across a few songs (so much so that Supergrass Gaz Coombes gets a song named after him). In parts (especially on “Be as Good as You Want to Be”), they dig deep in the indie-math-rock-guitar-hero well to take things up a notch, likely a result of Josh’s [b r a c k e t s] influence. The songs are solid and satisfying – and listening to it makes me feel grounded and joyful – which is high praise, especially these days.

The album is an obvious collaboration among friends – and it’s rounded out with some help from Pacific Northwest notables:

How’d some of the band member’s favorite songs come together? Well, BOAT was kind enough to share some stories:

The song that’s most significant to me from the album is “Metabolism.” It’s just a reflection of my subconscious from the last few years. I don’t remember writing down the words, they just came out like a mantra. I couldn’t add anything more, or take any away, it was just a couple sentences and captured my mind for the last few years in one shot.

I have been inspired so much over the last few years by musicians who are driven by the process or need to make music. Trevor Dickson (The Nightgowns), Karl Blau, Shelley Short, Scott McCaughey are examples of people who just seem to have a need to create music. It doesn’t matter who hears. it, they have a need to make it. I would love to be mentioned on the same list as them. Kimya Dawson is another one recently who is so inspirational. There’s no filter, it just seems like these artists are in tune with their brains and creative powers.

As we get older, it is so evident how important it is to find joy. No one can find it for you, and you don’t know why the world is the way it is, or what’s next. I get so much joy from joking, talking, making music, eating pizza, and just being around the BOAT guys. If that is all there is in life, I think I’m good with it! I am trying to get better at prioritizing people and relationships that I get joy from. I think that is why BOAT keeps making music. A pizza conversation can inspire four new songs and create four more opportunities to eat pizza together. It’s kind of perfect.

“Tread Lightly” – the song is most personally significant to me. This was one of the first two songs we made. BOAT has been labeled a joke/funny band, but there are so many of Dave’s lyrics that are meaningful and profound to me. “Tread Lightly” is about Dave having brain surgery (days after our last public show, by the way in early 2018). He can speak more to that, but I love how soul-bearing this one is. I got chills the first time I listened to the demo. I loved it so much that we just used that version for the album with refined drums and overdubbed layers.

My father-in-law has a Seeburg Jukebox from 1957 and I love listening to 50’s-60’s jams with my son on that thing. None of the songs are longer than 2:45. Just like BOAT songs.

One of my favorites is a Beach Boys Medley:

For me, making a new song or sound thing is addicting and transforms my mood. In the time since the last BOAT record, I rejoined the band (2013) and became a dad. One of the things I missed in those years in between was the feeling of having new music percolating. About two years ago, I started cataloging drum ideas, tossing them in Dropbox for Dave to use in GarageBand. We figured out that we could trade GarageBand demos back and forth quickly and seamlessly. Although there was much less time in the space with all the guys, this process feels like the most quintessential way for BOAT to write. Dave’s home demos have always been truest and most unique vision of his songs. I think “Tread Lightly” (the album) finds a sweet spot between those home demos and a studio album.

In the years between, Dave formed Unlikely Friends with Charles from Math & Physics Club. I produced the records (two LP’s “Solid Gold Cowboys” and “Crooked Numbers,” and one all NW cover album “Greetings from the Great Northwest”). Mark (of BOAT) played bass most of the time. Dave and Josh are brothers-in-law. So we were all still very much in each other’s lives. But coming back to do “Tread Lightly” felt fresh, and inspiring and like coming home.

“So Many Reasons Your Hair Turns Grey” is a special song for me. I love Dave’s lyrics on this one and think the way Jackson built the layers of sound is just remarkable. I like the guitar part I play a lot and had fun recording different layers and versions of it. My natural tendency is to play a lot and I’ve been learning (over the past 15 years or so) to play a little bit less. Sometimes the spaces between parts are just as important as the parts themselves. That being said, I play a lot of notes on this one, so it feel like I’m right at home! Also, Mark’s bass line is good as hell on that one. And that little haunting piano line (that I think Jackson played) is an example of a small thing that makes a big impact on the overall song.

RIYL – BOAT or anything mentioned in this article:

And, if you’re ready to join the BOAT superfan club with me, keep your eyes on the BOAT instagram account. Dave hosts “Boat Song of the Night” shows now and again. It’s a 20-40 minute variety show with guests, band performances, and a kitty dance party. It started as pandemic reprieve in the form of remote hangouts and entertainment. Each episode gives me life and I hope they continue on beyond the chaos that is 2020. I really can’t recommend it enough – you should totally join us in the BOAT instagram live room for the next BSOTN show!!!