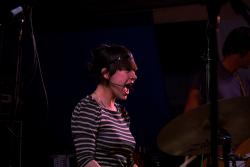 One of the great things about rock and/or roll is that you can appropriate anything you want and make it into your own image. Case in point: San Diego’s Grand Ole Party using the name that is commonly associated with the Republican party.

Grand Ole Party are not a bunch of Bush-voting conservatives. No, they’re a bluesy rock band that kicked ass during their set at the Capitol Hill Block Party on Saturday night. Playing for a large crowd at the Vera stage, Grand Ole Party – especially its singer/drummer Kristin Gundred – held their rapt attention for about 40 minutes. She has a powerful voice that could be welcome in a gospel choir. Beth Ditto of The Gossip is her closest contemporary comparison point.

The songs are funky but have a lot of blues influences, too. Thematically, they’re a Southern rock or gospel band with a garage rock aesthetic. Gundred sings about sin, death and good vs. evil. You know, the kind of light fare you’d expect from a garage band.

For about 40 minutes, Grand Ole Party ran through most of the songs from their excellent album Humanimals (which was produced by Rilo Kiley’s Blake Sennett). Gundred, who was flanked by bassist Michael Krechnyak and guitarist John Paul Labno, is the first singer/drummer I’ve ever found compelling. Aside from an interruption due to her mic shorting out, the set was pretty close to flawless.

Songs like “Nasty Habit”, “Insane” and “Look Out Young Son” had the rocking along with the band.

GOP was the final band I caught at CHBP this year and I wouldn’t have chosen to end the already-memorable weekend with any other band.