NME is sponsoring the first-ever NME Awards USA. I just tried going over to their website to read about the nominees, and when voting ends, but apparently you need to be a registered user to see the information. And that's completely lame. So I won't be voting.

If you don't have the same online editorial hangups as I do and would like to cast your ballot, here are some of the nominees. You can see the full listing over at LimeWire.

What do you think? I like how they only have American bands in the "best" area and categorize everyone else as international, instead of allowing Americans to pick a non-US band as the best. And by "like" I mean, don't like. And… Oasis?? C'mon now people. Try to stay with the current century please.

As one of the commentors on Limewire said, "I think they're doing this to demonstrate that Americans have poor taste."

The awards will be broadcast live on NME's MySpace page on April 23rd.

While the announcement doesn't really impact us in the Northwest, the rest of you US-based Kaiser Chief folks should be aware that the band has canceled most of its upcoming US tour.

Kaiser Chiefs fans lament today with news that the band have cancelled their upcoming US tour, citing the need to focus on new material. Kaisers drummer Nick Hodgson issued the following statement.

“We’d like to apologize to fans in America and Canada, especially those who have already bought tickets, but something had to give. We’ve been extremely busy all year and had no time to focus on the future, we plan to have new material out as soon as possible and we’ve wanted to record all summer. This needs to happen before our European & UK shows at the end of the year so we can play a few of our new songs live, we’re keen to explore new ground, beyond the sound of our first two records, so we’re headed back into the studio to begin that process.”

The band will still perform shows in Austin and New York, but the rest of the dates are now cancelled.

When the news gets out, um, I guess I predict a riot?

With the huge amount of music that comes out, well, all the time, a lot (actually probably most of it) makes it past me without registering, especially in the flurry of TIG-related reviewing and generally keeping up with the Forkses. Anyway, I feel like sometimes I find things well behind the curve and I want to share. You should to … have you recently fallen for an album that ain't quite new anymore but recently discovered by you?

My recent discoveries include:

Spank Rock – Yoyoyoyo – How'd I miss a bizarre mix agglomerated samples, spastic beats and rhyming? It's like the album that I'm sure the Neptunes or Kanye wish they could produce.

Kaiser Chiefs – Yours Truly, Angry Mob – OK, this isn't that old, but after the infamous 1.1 or whatever it got from P4K, it felt like it fell through a timewarp to instantly age five years and get dumped directly into discount/used bins. But you know what? It ain't that bad at all, heck, I would have given it at least a four (actually, better than that, but you get the idea)

Prefuse 73 – Vocal Studies and Uprock Narratives – A totally hidden gem for me that got saved when I decided to purge my pile of burned CDs to reclaim binder space. I ripped the album and threw it on my iPod after years of obscurity (for me) and wow, this album feels brand new (musically).

Capricorns – "In the Zone" – I didn't technically miss the Capricorns as much as have one song of theirs ("The New Sound") that I thought was brilliant. I finally found myself a copy of their full length (thanks to TIGer K.D. Mau) and voila! instant fun! The Capricorns are like a female, east coast version of Casiotone for the Painfully Alone, but more crazed and aggressive (and to go with our barf theme for today, they apparently vomited in one of my friends' cars when they played for KBVR Corvallis).

So, anybody else have some newfound treats to share?

Here are some facts about the album to help celebrate:

It was the first British album done with eight-track recording, running a pair of four-track machines in synch.

It was recorded at the Abbey Road studio in London over more than 400 hours spanning 129 days, and was released on June 1, 1967.

The album was meant to be played and experienced from start to finish.

In 1968, Sgt. Pepper was the first pop album to win the Grammy award for album of the year. It also won best contemporary album.

Rolling Stone magazine placed the album in the No. 1 slot on their list of the 500 best albums of all time.

Within weeks of its release, Jimi Hendrix was performing the title track in concert.

Sgt. Pepper's Lonely Hearts Club Band was treated as a real band, and the album cover art, designed by Peter Blake, shows the group presiding over the funeral of the Beatles surrounded by a congregation of pictures of famous figures such as Marlon Brando, Aldous Huxley, Oscar Wilde, Marilyn Monroe, Bob Dylan and Karl Marx.

In honor of the 40th anniversary, the Kaiser Chiefs, Razorlight, the Fray and some other bands have joined to record songs from Sgt. Pepper's Lonely Hearts Club Band.

Anyone have any good stories about this album they'd like to share with the rest of the intraweb? 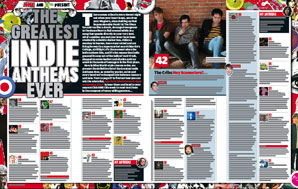 Just because it is now officially NME Thursday and everyone loves themed lists, how about we talk about the Greatest Indie Anthems ever… and what NME / Xfm and the general UK public think they are.

What do you guys think? Surely, everyone realizes that there are better songs than these — but we're talking anthems here. I am proud of Pavement t 28, but what about Ash's "Kung Fu" or "Jack Names the Planets"? Idlewild "Rosability"?

And by 'anthem,' do they mean songs with which drunk people sing along in unison? 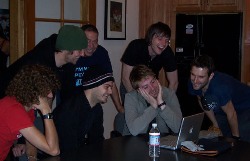 For as many listings we've got this week, there's nothing I'm super excited about. Amy Sedaris is always a hoot (she and Letterman have quite the banter). Kaiser Chiefs are all over the place, and Alice Cooper chatting up Carson Daly (or vice versa) could be interesting.

***Wednesday, May 2***
Alice Cooper on Last Call with CARSON DALY
Fountains of Wayne on The Late Late Show with CRAIG FERGUSON
(Given my feelings about Fountains of Wayne and Craig Ferguson, I think F o W are the perfect musical guest for that show.)

I love technology! Thanks to a live webcast stream, now we can see all the great bands playing Coachella this weekend without having to deal with the lines, portapotties, drum circles, and $10 bottle of waters.

Here's the schedule for today an 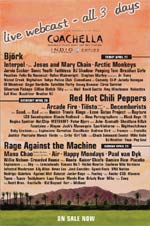 Well, Modest Mouse's reign of terror at the top of the Billboard Album charts was brief. We were Dead Before the Ship Even Sank did it's own sinking to #11 in its second week, getting bumped out of the way by, among others, the new #1 Tim McGraw, NOW 24, Good Charlotte, J-Lo, Young Buck (who?), and Mims (what?). The best indie/alt could show for was the Kaiser Chiefs entering at #45 with Yours Truly, Angry Mob (am I the only one lacking enthusiasm toward this album?)

Of course, this still leaves us two weeks until we can enjoy Conor Oberst perched at the top, staring down at all of creation.