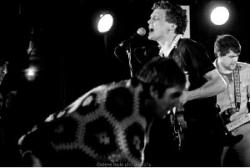 At an all ages show at Neumos on Monday night, Phil Elverum, Mt. Eerie’s center of gravity, stood behind a white milk crate filled with Mt. Eerie and The Microphones vinyl. Promptly at 9:20, he and his new lineup took the stage to play their debut show as a band.

And you could tell they hadn’t played live before. The bassist exchanged nervous glances with the mostly inactive keyboardist. The keyboard player’s shining moment was when the slight notes she played eked out between excessive reverb and the roar of two drummers, during “Mouth of Sky.” This is one of the softer songs they played. The tempo of their set never settled. Every other song ripped into a heavy and cacophonous roar only to be followed by the sparse lyricism of Elverum’s fragile vocals during more minimal songs.

The teetering balance between these two contrasting sounds drew me in the way The Glow pt. 2 and The Microphones release, Mt. Eerie, did when I first heard them. So, needless to say, I balked at the person behind me who remarked, “sounds like bad Mogwai,” at the end of “Stone’s Ode.” While I wasn’t overwhelmed by the bands performance, these songs hold a merit all their own that lives beyond a stage. This is the encompassing whirlwind created by a song like “Lost Wisdom pt. 2,” played with two drummers behind the unassuming, Anacortes native, Elverum.

The commentator behind me changed his tune after “Between Two Mysteries” ends and, I assume, his desire for a melodic song was satiated. The band ended with Elverum paying homage to Calvin Johnson, the man who signed Mt. Eerie to K Records, with a cover of “You Turn Me On” by Beat Happening.

While Clues set up, the anticipation of the audience was noticeable by the tall boys lining up directly in front of me near the stage. I asked one of them if he wanted to switch places. It was clear by the pitch of his voice that he’d already decided that this is his new favorite band. Can you blame him? Clues has a winning combination of founders; Ex-Unicorn, Alden Penner, and Brendan Reed, whose drumming and vocals can be heard on the debut EP of The Arcade Fire. These two brought on Ben Borden, Lisa Gamble, and Nick Scribner.

The drum set was comprised of two different kits. One of the cymbals was replaced by a round saw. There was what looked like an old school fire alarm that created a sound similar to a xylophone, connected to the drum set as well. Behind this sprawling display of percussion was a sheet of metal so thrashed, it looked like aluminum foil.

On the first song, Gamble played the saw. As the set continued she rotated around the stage from instrument to instrument. In fact, all the members did. For a second it seemed like Borden was playing two guitars at once, until the Suzuki Qchord flew off the top of the keyboard as he banged the keys. The stage was dynamic and their songs veered towards the unexpected–every time the beat settled, it dove off a cliff or sprinted up an incline, hurtling towards bipolar melodies and tempos.

This aspect of their sound reveals a Unicorns influence. However, there’s something to these songs that makes them heavier. They seem more invested in their erratic movements, where the Unicorns felt flighty at times. These songs are more mature and have a weight that can be attributed to Reed’s influence in helping to create songs where Penner’s high pitched voice evokes a more serious tone.

The carnivalesque, soft, shouted, looming, fun, and seemingly disparate sections of their songs create a sum larger than any of those parts. Much as a house is made up of rooms and yet a home is bigger than a house, I suggest taking the time to tuck into Clues and find that space inside their varied sounds that feels like home.