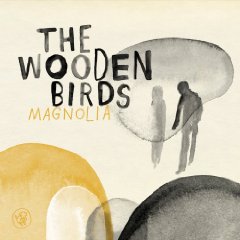 Austin-based quintet Wooden Birds is the brainchild of indie everyman Andrew Kenny, who also heads up the American Analog Set and has played with Arthur & Yu, Broken Social Scene, and The Album Leaf.  This latest project sees Kenny's songwriting take an even mellower and more stripped down turn — if that was ever even possible — heading into territory well-covered by Earlimart, Iron & Wine and Jose Gonzalez.

Comparisons to the latter are the most prominent in the 12 songs that make up Magnolia, as they rely on repetitive, percussive acoustic guitar lines backed by the occasional tambourine, electric guitar melody or female vocal harmony.  Kenny's sleepy, hushed vocals are great for listening at a late hour when you just want to think and reflect.   Keep an ear out for "The Other One," a lazy front porch tune that is indescribably likeable from the very start, and "Seven Seventeen," the album's first single about a ten-year age gap in a relationship.

Wooden Birds will be at Chop Suey tonight, so head down and see if you can catch the Radiohead reference in the chorus of "Choke"…hint:  think of Baz Luhrmann's Romeo and Juliet.