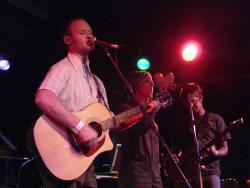 Athens PopFest 2007: Day 2 with The American Revolution, The Postmarks, Tullycraft, and more…

I missed the day shows (Atlanta traffic sucks big time and it took 7 hours to pick up a friend at the airport!), but no mind, the night shows more than made up for it.

The evening started with Ideal Free Distribution. They were suped-up indie – flush with loud guitar fills and two band members playing maracas during songs. Since I’m not super-familiar with their songs, the highlight had to be their cover of The BeeGees "Every Christian Lion Hearted Man Will Show You." Indie. Ironic. Neat.

The next band we saw was The American Revolution–one of Robert Schnieder's (of Apples in Stereo) side projects (another one of his side projects, The Marbles, played earlier in the day). With the signature Apples lead vocals, and the American Revolution's layer of psychedelia overtop every guitar swirl it was easy to imagine you were at an Apples show with a lot of vitamin C in your system.

Perhaps most interesting two points of the set were not related to the music, but the stage show component. Robert were a silver floor length robe with fancy embroidery down the front. Shiny! Also, they had a bearded guy sitting in a chair on stage with them. The fellow didn't play any instruments. He looked like someone your dad would have invited from the office to the Saturday BBQ.

When Robert addressed him, he called him "Sir" and explained to the audience that he actually wrote all the American Revolution's songs. During the curse of the set, Robert asked "Sir" for advice on how to start the songs and what to play next. Was he just a friend that he wanted to get on the guestlist and backstage so Robert made him a "member of the band" (I did hear that it was kickin' back there after all) or someone that Robert owes a poker debt to? Not sure. Perhaps he really is a svengali? I've must admit that I've always wanted one since the Hives romanticized the whole concept.

If I were to see The Postmarks' formula on paper, I'd categorize it as something I would hate, loathe even. Soft whispy female vocals with hints of Azure Ray and restraint of The Clientele under the indie umbrella?

Rather, the underlying the nods to Mazzy Star redeemed the Postmarks set into a palatable, yet solemn, group of songs. Usually a trio that has expanded to a five-piece for the tour (which included a Lollapalooza stop just a few days ago), they combine fetching keyboards and vocals that more than just ache with purposeful restraint.

The highlight of the night for me came long before the headliner. The club filled up as Tullycraft took the stage. They started off with the audience favorite "Wild Bikini" (and the cute indie kids shy dance moves hit full force). From there they launched into a block of songs from the new album (due for release in October / November).

The moment that was talked about for the rest of the fest came after the audience sing-along to newbie song "Take Away the Make Up" (a song that will hopefully be on the new album and was spotlighted on the You Ain't No Picasso blog) when an audience member nervously joined the band on stage. In his hand, a suspicious small white ring box.

The band introduced Josh and said he had something very important to ask. The audience went silent as Josh proposed to his girlfriend stationed in the front row. The couple, huge Tullycraft fans, drove all the way from South Dakota for the Tullycraft show – and Josh decided to make the trip even more memorable. Of course, Adrian's answer was "Fuck yea!" – to which

the audience cheered, and the teary-eyed band launched into the couples' favorite song "Miss Douglas County."

Having seen the band multiple times over the last few years career, this show was one of my favorites. Perhaps because of the setting – an Athens and indie-rock landmark, or the diverse audience of indie-pop fans from all over the country (I met folks that came as far as France, Philadelphia, Vermont, Texas, and Canada), or that they featured songs from both their hidden back catalog (it’s been a while since they played “Super Boy” or have ever played “Secretly Minnesotan”) and new unreleased tracks (with "Take Away the Make-up" being the stand out track so far) or that I'm a sap for an indie-pop marriage proposal… but the show is one for the bootleggers.

Really, how else could I celebrate the festivities than by partaking in some shots with various members of the band? Sets by Casper and the Cookies followed by The Circulatory System rounded out the show. But to be honest, their efforts were lost on me (except for the note in my journal that reads "The Circulatory system tore it up with a clarinet.").

Perhaps it was the couple of whiskey shots… or two amaretto shots? Let's blame the amaretto shots since those were as awkward as they sound (I felt like I was sneaking nips of the juice at my mom's bridge party.) Regardless, it was during this time that I conversed with PopFest attendees (Darren Hanlon included!) and we reveled in the joy of the 'fest.