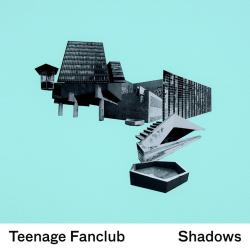 (Teenage Fanclub play with Superchunk on October 14, 2010 at the Showbox in the Market.)

It’s been a half decade since the last Teenage Fanclub record Man-Made, but their influence has never gone away, even if melancholy power pop bands have come along within that span of time which don’t know how much they owe to the Scottish kings. Of course, on early 90s brightly shined gems like Bandwagonesque the band was itself unafraid to remind underground pop-lovers of Big Star or Badfinger or the brimming years of indie bands like Orange Juice and Josef K. from their own region less than ten years before.

In that era, Normal Blake and Gerard Love and Raymond McGinley updated those sounds with an “alternative rock” friendly grind in the guitars and left buzz humming in the amps, along with an excitable rasp in vocals vividly anticipating unrequited love. But new full-length Shadows is a haunted album, a September Song cycle albeit lovely and full of dazzling ear-worms, quite clear and direct in both sense of the word “tone.” Opening track “Sometimes I Don’t Need To Believe In Anything” has that mid-late 80s Cure-swoon riff on bass and rhythm guitar that propelled less doomy bands, but always feels like a brisk walk near burning leaves after a bittersweet break-up. When the chorus elegantly explodes with horns and strings and keyboards as the song title is repeated, you can imagine the angels knitting a warm shawl for the boys to share (as they share the vocals and playing throughout, and the “ba-ba-bas” and “oh-wo-wos” too).

Next up, “Baby Lee” is based on several stacks of the perfect beat band crescendo describing a stiff yet masochistic adoration (“Make me suffer, tell everyone that you know”) set to a slightly slower, mellow variation on a nugget from Beatles ’65. It’s one of many tracks in which the narrator is watching from a distance, pining for what was probably out of his reach in the first place. “The Fall” follows with an even more settled pace, as the protagonist describes how he “fell into another world” and “crossed lines I’d never thought I’d cross” and is trying to light a fire under his own ass to wake up in the autumnal afterglow. Like with many great Teenage Fanclub songs, it creeps in the background till you remember what poured the Scotch into the Scotch-taped remnants of your own multi-shattered heart.

If you were more of a fan of their classic Grand Prix, when the band found the snow leopard in their sound and rode it into sophisticated, golden glory, Shadows will be a welcome return. It fits the Merge label like a glove, and will be a joy to anyone leafing through the catalogue to find the next installment in a 69 Love Songs reissue. They still are unafraid to show their influences bluntly, even if it’s something as ubiquitous as “There She Goes” by The La’s in “Shock and Awe,” or a strangely Chills feel in the lyrics of “The Back of my Mind” (“She doesn’t know if she’s dead or living / She’s like a diamond taken by the sea / She calls to me from the back of her mind”). They just openly gush out on the same gorgeous records we all play to ourselves in the eternal bedrooms of our minds. In attempting to recreate the feelings those records create, Teenage Fanclub have received everything from chocolate-swapped kisses of fanatical followers, to veiled hissing from critics who would wish they would man-down about their relationship wrecks and be more musically aggressive again. In the meantime, they are playing live to promote an album that sounds as if it could very well have taken five years to write and record. And an eternity of broken hearts to live through. And we are very lucky for that, and to play a cool breeze called Shadows in the summer of 2010.