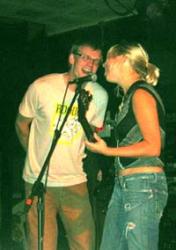 Holy cow — I just got back from the Athens PopFest. Having lived there for a couple months during college, I was already sold on Athens, Georgia as being one of the best places in the world. Where else can you dine on delish food at a restaurant partly owned by Michael Stipe and then walk to one of the THREE GREAT indie record stores downtown and find the rare, the import and the indie-rock staples you need to complete your record collection? And parking tickets are only $3? Athens is the place to be, I tell you.

I was there last week for a two-day portion of the four-day festival. It was organized/presented by the swell folks at Happy Happy Birthday To Me Records. Huge thanks to Mike and Eric who really outdid themselves putting together quite the sampling of today's indie-pop community.

Liz sent me a text message when she arrived proclaiming that Athens was, "The coolest place outside of Seattle. It is one big hug. Lovey."

Every word of that text message is true! With shows starting at 3.30p everyday and lasting until 2a, and the cost of living at a comfortable level to allow the free flow of affordable libations, I had my share of Makers/Ginger Ale. And did you know the 40 Watt sells 24 oz cans of PBR? It was no wonder I heard that a group of festival goers ended up skinny dipping in a local apartment complex pool at 3a.

But, beyond the great environ for the event, the best thing about the Popfest was that it gave me the stuff I knew I was going to love, AND I ended up finding a whole new batch of bands to freak out about (and raid the merch tables of).

I knew going into it that I was going to leave the 'fest raving about the Bunnygrunt and Tullycraft sets. I mean, c'mon, I am only human.

Some of the most noteworthy of my Popfest 2005 discoveries include Fabulous Bird, The Mega Hurts, The French Horns and The Smittens.

Fabulous Bird, composed of The Sunshine Fix, I AM THE WORLD TRADE CENTER and other notable Athens indierockers, have put together six-piece powerpop band along the lines of Big Star with overtones of the Who's vein of arena rock. And the entire band rocked on a stage that was about 6 feet 6 feet square.

The Mega Hurts, a three-girl / one-boy drummer line-up featuring Karen from Bunnygrunt, got the dinner crowd riled up. They lift The Donna's sexy chutzpah and The Go-Go's hooky pop to create a St. Louis brand of punky pop all their own. They have a 7" and t-shirts available for purchase and they pledge to work on a full length this Winter/Spring.

I'd read about The French Horns and am a fan of Brittle Stars and mrclay, so hearing The French Horns' bedroom-pop songs live and in trio form (usually they are a quartet) was a quite a treat. The bulk of the set was spent exploring their serene, blissful side. The highlight came at the end when they switched gears (and guitars) to bring out the jangle and pop.

The Smittens are a five-piece from Burlington, VT who oozed with DIY indie-pop-cuteness. As the Orbit of bubblegum pop, their brand of is sweet, wide-eyed, and dare I say, stylish. The female vocals disarmed a la The Softies, but when Max Smitten (the dashing one) took the mic and brought gasps of early Magnetic Fields lightened with all-American glockenspiel glee.

And, of course, there are always the bands that you missed due to poor planning, hunger, or travel restrictions. This year's list includes Cars Can Be Blue (I got their CD and I promise future joyous proclamations about them at a later date), Poison Control Center (ok, so I didn't see them but because of their design aesthetic bought their album and t-shirt anyway), Galactic Heroes, Red Pony Clock, Of Montreal, The Eames Era, New Granada, and Elekibass. Needless to say, my wishlist has significantly grown and I am keeping an eye on everyone's tour schedule.

In short, Athens and its residents are total peaches. I want to hug them and the aforementioned indie-pop bands in residence until they bleed.