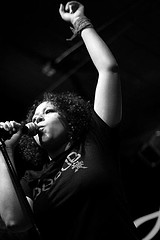 KEXP Audioasis Showcase: This One's For the Girls

The KEXP Audioasis showcases are an investment of time and energy, and not an undertaking for the fickle show-goer. Why, you ask?

For the uninitiated, here's how it works: KEXP presents an all local showcase the first Saturday of each month at The High Dive, and each month they select a different charity to support. The first two performance get broadcast on air during Audioasis (the local Northwest music show), and the rest go all night. So if you're planning to see all the bands, you've gotta get an extra shot in that latte: the fun starts at 6p and doesn't stop until the last call. And KEXP always pick such great bands that it's nearly impossible NOT to stay for the entire night.

Case it point: the lineup for May: Thee Emergency, New Fangs, Sera Cahoone, The Fading Collection, and Daylight Basement.

The charity for May was Powerful Voices, whose mission statement is, "To instill leadership skills, foster development of critical thinking and promote the individual potential of adolescent girls." I can't think of a local roster that could better represent that goal than this one. I knew I was in for a night of it. I had my Luna bars packed.

Thee Emergency kicked the night off long before night actually fell (at 6:30p, specifically). I'd heard tons about this band's blistering stageset and was giddy with excitement to see them live. The band didn't disappointment.

Frontwoman Dita Fox led the band with her gritty, soulful, rock vocals. Her stage presence, while captivating, was decidedly mellow compared to guitarist Sonic Smith, who not only blazed the guitar, but also invented some new yoga moves while doing it (downward guitar player, anyone?). He played on his back with his feet tucked under him, he played with the guitar behind his head, he played whilst dashing off-stage and through the crowd (okay, maybe he put his guitar down for that part, but he did make it back onstage to start playing). The showmanship was crazy enthusiastic and rare to see in Seattle — let alone in Seattle, in broad daylight (and to a stoicly sober room, no less).

While Thee Emergency are one of the hottest bands in Seattle right now, it's hard to mention them without saying Detroit. Yes, they sound like the Detriot Cobras. Yes, they're clearly influences by the late 60s – early 70s Detroit garage rock scene. Yes, they even went to Detroit to record Can You Dig It?, their debut LP (releases on June 13 on local label Blue Disguise Records — awesome!). In fact, you can experience their live show here in Seattle on June 17th at the Crocodile, with two shows (one all-ages, one 21+).

{Aside to band: smart move on the name change. TheeEmergency.com is waaaay better and easier to find than TheEmergencyTheBand.com was.}

Next up, New Fangs continued to rock the day away. The band is a local punk rock superband of sorts, featuring past and current members of The Blow Up, Tractor Sex Fatality, and Make Out Choir, among many others.

They were also the only band of the evening with a male lead singer (their female representative was lead guitar player Kimberly Morrison). And she was, in a word, incredible. It made me think: how many bands have I seen with an insanely great female lead guitar player and no other women in the band? I can't think of one. Can you? Perhaps Powerful Voices could have Kimberly come in for a Career Day. Girls don't just need powerful voices; they need powerful stringed instruments with powerful amplifiers!

I left for a breather as the New Fangs set wound down, and returned 20 or so minutes later to the oddest of changes: the crowd had swelled from a comfortable, quiet group of music fans watching balls-to-the-walls rock to a PACKED-TO-THE-GILLS club of partiers listening to incredibly mellow, beautiful folk music: Sera Cahoone was onstage.

And while her set was clearly the most understated, she won the award for the badass of the night in my book. Her live performance was as quietly brave as her recordings. Playing lo-fi country pop, armed with her guitar and her vocals, in front of a sold-out group of Fremont Saturday night revelers — how terrifying.

But Sera flourished, her graceful, beautifully crafted songs winding through of throngs of patrons. Now I'm not generally one for the singer-songwriter sorts. A friend once told me, "If it's anything less than Elliot Smith, then I'm not interested." And I'm not sayin' Sera sounds like Elliot (cause she doesn't). Her tunes carry a simple elegance, a hush of vulnerability, that while incongruent with the room was still lovely to hear.

After Sera, the set took another dramatic turn, this time for the dancable: first with trance-rock band The Fading Collection, and then with the synth-pop stylings of Daylight Basement, who not only rocked the (very enthusiastic to say the least) crowd with the hits from their debut record Any Kind of Pretty, but also played several brand new tracks, including a sexy little number called "My Guitar" (with it's giddy little chorus, "When all my lovers are gone, I make love to my guitar/When I've done everything wrong, it is never very, never very far." And speaking of sexy, did you get a look-see at front-woman's Bre Loughlin's outfit? (By local designer Yoshimi). Holy hot-stuff!

The night relentlessly rocked on. We danced. We yelled and sang. We danced some more. We (the Royal We) just might have bought another round for all the dancers up front, including a Vodka Red Bull for Matt ("It's all I ever drink") and a Mai Tai for our new show pal Brad (how much do we admire a grown man who shamelessly orders Mai Tais? Um, a lot.). Then we danced and yelled and sang along some more. Phew. It was a damn workout. Like KEXP of Steel.

I'm exhausted just reading about it.

Good, then you won't mock me when I tell you I didn't see Thee Emergency's late night set. I heard it was damn drunkenly rowdy. Hats off to those guys (and girl, of course) for playing first and last on a most epic showcase.

If this review hasn't exhausted you and you want more coverage of the night, there's more over at the new KEXP blog. And there are tons more photos of the event at Flickr.