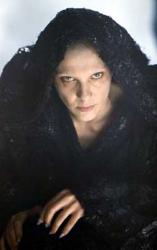 The Passion of the Christ

The Passion of the Christ is the most boring movie I have ever seen. The only reason I didn't walk out is that the film is culturally relevant and a product of these strange times.

Watching it, I felt like I was trapped in some drunk soccer player's Sunday school class watching an instructional video on how I SHOULD think and feel about "The Christ."

In my opinion, it is probably best to avoid the movie altogether. I will summarize it for you so you don't have to see it:

"The Christ" is played by a most British-looking person (James Caviezel) among many Jewish-looking Jews. He is incredibly boring — except in the moment where he invents the modern table. And that would have been boring too, had my pal not laughed and said, "Jesus invents the modern table!" There is no way that the "historical Jesus" could have been so boring. Were Jesus as boring as Mel Gibson's "The Christ," he would have failed miserably as a preacher. We would not know about him today.

"Satan" is played by Sinead O'Connor.

{Editor's note: Not really. But Rosalinda Celentano does look an awful lot like her. –embracey}

Satan roams around acting androgynous while Germanic-looking Romans and Jewish looking Jews torture and kill the British-looking "The Christ."

After "The Christ" dies, an earthquake is unleashed.

According to the gospels, Jesus was a very interesting, charismatic and passionate person. He said shocking things like, "Don't worry about the future. Look at the birds in the air, do you think that they worry? They do not reap or store away in barns. Yet God takes care of them and you are worth more to God than birds."

He also did some interesting things. Like, as a teen, he yelled at priests during their sermons in the middle of church, telling them that they didn't know about God. He also saw some businessmen selling sacrificial animals in the church one day. He had a violent outburst. He threw their tables down, spilling the money everywhere, and freeing the poor animals. He yelled at these guys. He said, "Don't turn my father's house into a market!"

Mel Gibson is selling Jesus as a sacrificial animal called "The Christ." I suspect that the Jesus of the Gospels would be as angry with Mel as he was with the businessmen in the church that day.

Basically, Mel's got it all wrong. He ought to redo the movie, and get it right. He should cast Sinead O'Connor as Jesus.