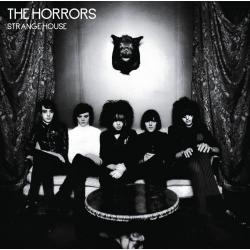 Sigh. NME and the British Press really love to hype bands beyond belief, and the Horrors are just another one of those bands that gets all sorts of press based on a few singles and a world of expectation is set up for them. If you heard the first version of the Horror’s “Jack the Ripper” then you might be thinking big things too, a return to some of the goth/punk sounds of the Stranglers or the Cramps, right down to the gloom-and-doom attire and names of the band members Coffin Joe and Spider Webb. However, if you want to see a primer on how not to make an album, the Horrors’ Strange House might be just it. Not that the album is bad, as such. It really isn’t patently offensive, but when you compare to what the album might have been to what it actually is, then you have to wonder what exactly happened.

One of the most disappointing first listens to any album this year must belong to Strange House. As mentioned before, the original version of “Jack the Ripper” is great – a balls-to-the-wall rock number that is as sloppy as it is glorious. So, what do you do when you record it for your debut album? You gut the damn thing, turning it into a lifeless dirge that sounds like it's being vomited by some sort of zombie bile demon. What the hell happened? I could tell you it was a bad idea from the start, heck your 80 year old grandmother could tell you it was a bad idea. What you get is just over-produced and overwrought mess that redeems itself a tiny bit towards the end when they pick the pace up, but by then you’re so taken aback by the misstep that you’re still just stuck on what they were thinking. It took some effort to even keep going, but luckily it's not all bad. “Count in Fives” turns out to be a bit like a Blur-meets-the Sex Pistols outing, which is actually surprisingly fun, while “Draw Japan” has got some interesting keyboards mixed, sort of reminiscent of the Charlatans “Weirdo."

There's a camp charm to “Horrors’ Theme," a sort of garage-rock Addams Family work – of course, it sort of makes the band’s goth theme seem like an calculated joke, which I suppose isn’t all bad. What I do know is that the band hits all cylinders with the luckily not destroyed new version of “Sheena Is a Parasite." It remains a real barn-burner that's a sloppy joy to behold (be sure to check out Chris Cunningham’s genius but disturbing video for the song) and melds perfectly into “Thunderclaps,” a darkly whimsical track that has ridiculous keyboards and choral vocals. Just when you think it’s safe though, the go and record “Gil Sleeping,” a bizarre prog/goth-rock jumble, like Iron Butterfly let loose on H.R. Puffnstuff. They at least close the album in fine style with “A Train Roars,” a song that wouldn’t sound out of place on Nick Cave’s Grinderman album – a complement for this band that seems to long to be a more punked-out Bad Seeds.

I think the problem with the Horrors can be summed up with this simple statement: they tried way too hard. Instead of just playing music, they tried to camp up their dark exterior, only to end up sounding like a parody of themselves, which is too bad. They come across as just too over-the-top to be taken seriously, like fodder for MST3K fans. I mean, their early singles weren’t works of genius by any notions, but they showed they were adding a bit more life into the fairly “paint by numbers” Brit-rock scene. Instead, they go too far on some songs and not far enough on others, leaving Strange House feeling really not strange enough to be truly satisfying.