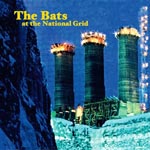 The Bats At The National Grid

For underground pop fans, particularly those of the pleasing New Zealand psycho-geography, it might come as quite a shock that The Bats have a new album out. They have not released an album since 1995's Couchmaster, which was an excellent drop off point for their brisk, sometimes frenetic, and sometimes trance-like folk-rock. Their sound is a positively effortless-sounding mix of garage pop and raucous power folk that invites the listener to come back again and again to discover the songs beneath the gentle flow of these styles.

The Bats' have returned to the studio with the original line-up intact; Robert Scott (ex-Clean vocalist/guitarist), vocalist and multi-instrumentalist Kaye Woodward, Malcolm Grant (ex-Builders drummer), and Paul Kean on bass (ex-Toy Love) have reunited, sounding as fresh as they did when they recorded their first official studio album, 1988's Daddy's Highway, or Compiletely Bats, the collection of their many singles and EP tracks released the year before. Their sound still has the rush of the rollicking "The Black and the Blue" they recorded for the surf movie Blastoff thirteen or so years ago.

The Bats' began in Christchurch with each member bringing a history of their own. Kean explains, "Toy Love split in 1980, and I went on to play with The Playthings and did a bit of live mixing for the Clean and a few other Flying Nun acts. I met up with Bob when he was in a flat with Kaye around the time when the Clean split. He and Kaye were working on a few songs and I recall a couple of impromptu gigs where I jumped up and played drums with them under the name of the Percy Taiwan Band. Thanks to Llamas happened somewhere in there. All The Bats shifted into Longfellow Street in 1982/83 and that's where things came together."

Scott had met Woodward at a Clash gig in their hometown. "He was looking for a flat and she needed a flat-mate," Kean says, "I met Kaye through mutual friends and she moved into the house where I was living with Malcolm and some others; Bob moved in too. We still live there, but just with our daughters."

"The Bats' taut jangle has become nearly synonymous with both New Zealand's pop underground and Flying Nun's rich roster," Lydia Anderson wrote in the Trouser Press Guide to 90s Rock. Their next label Mammoth "were really good, very helpful and willing to listen as well, they did a lot for us," Scott says. Kean adds, "They [Roger Shepherd and Flying Nun] launched the Bats in America by releasing 'Daddy's Highway' and 'Compiletely Bats' which we are very grateful for. Changes were happening at Flying Nun and we found it hard to tour with children on a shoestring budget. Mammoth signed us and released 'Law Of Things,' 'Fear of God' and 'Silverbeet.' [But then eventually] Mammoth sold to Disney Records and trimmed down their 'stable' of acts."

"The Bats toured the States a few times between 1988 and 1994," Kean explains, regarding their extensive journeying. "We also played a couple of CMJ festivals and a fourteen date tour with Belly and Radiohead. We're very keen to come back to the States because the folks always showed us a good time there, fingers crossed for next year."

To prepare for seeing the Bats live, The Bats At The National Grid is a great place to start. It features gentle psychedelic moments, as on the instrumental "Hubert," and the untitled loop-based hidden track at the end. The album harkens a little back to when Scott was writing more melancholy material, as on Daddy's Highway, which started off with the startling "Treason" and hit a subtle pinnacle of sadness with "Miss These Things." (His voice is still soft and melodic, but confident, and when Kaye helps out on "Mir" the flow feels natural.) Those previous classics are reflected in mildly mordant sing-a-longs here like "Bells," which evoke the same pastoral remembrances of things past. As quickly as the Mekons, though, the Bats then turn around and kick out a rowdy bar anthem like "Single File" immediately thereafter. There is still a loving sense of the 60s on these jangling tunes. "Pre War Blues" is a haunting, timeless ode to empathy ("I just want to see through someone else's eyes"), but sounds like it could be from a protest compilation from San Francisco or Liverpool hippie bands. Yet "The Rays" has a suitably but not syrupy sunny disposition that sounds like Scotland's Orange Juice at their most poppy (and pulpy), too.

On tracks like "Flowers & Trees," a heartfelt ode to nature and its creatures, there seems to be a subtle sense of ontological sacredness to the feeling of the Bats' music. "We leave it up to the listener to discover their own meaning behind the songs," Kean asserts. "Some are like obvious stories while others may require reflection or a look in the mirror. It's a bit like asking 'what does that mountain mean?' or 'Why do humans kill each other?'"

The band enjoyed their time recording the album at the studio in their album title. "After having exorbitant amounts of our money spent by God knows who with Fear of God and Silverbeet, we wanted to regain control over the budget and production as we had done with Daddy's Highway, Law of Things, and Couchmaster. We feel those records express our music best and they cost a tenth of the money to produce. Little budgets can make good records too. The National Grid was a good and comfortable and inexpensive local choice with an engineer, John Kelcher, who we trusted."

"With releasing The National Grid we asked around a few labels and came up with interest from Magic Marker," Kean says. "They have great acts compatible to our style and a similar philosophy of life and love of music to us."

"Someone mentioned their name to me so I emailed them and they seemed interested so we sent a rough of the album and it went from there. I am not exactly sure where I heard the Bats first," Magic Marker co-owner Curt Kentner explains their side of things. "I know that through my label partner Mark our college radio station in Bloomington, Indiana circa 1995 my awareness of the 'Kiwi Rock' came about. The Chills, The Clean, The Bats, and basically anything on Flying Nun. I slowly tracked down releases by these bands and label. It is interesting how many Magic Marker bands were influenced by these bands. Boycrazy, Walker Kong, The Owls, and Kissing Book all had members who were enamored with the Kiwi Rock movement. Mark and I are both HUGE Bats fans and would list them as one of our favorite bands before releasing this record."

When Kentner heard from Scott via the e-mail, he and his partner "freaked out and tried not to get too excited," he says. "Mark got so excited that he was going to call Robert. Then we decided we better heard the record first. When we got it in the mail it was like a dream realized."

For fans of Kiwi Rock or seekers looking for pop confections with substance, the warm, hypnotic glow of the Bats' new record will be like a flame to a moth—very hard to resist.